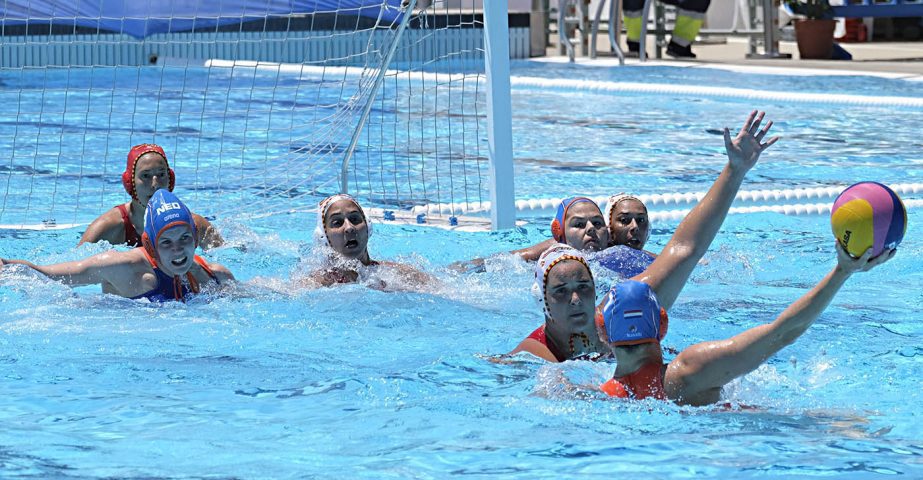 The Netherlands have beaten the reigning Olympic Silver Medallists, Spain, with a narrow but well-deserved 12-11 win in the World League European Finals.

In an enthralling battle between two dominant forces in European Women’s water polo, the Dutch ran out winners. There was not much to separate the sides, but the Dutch were a little bit more organised in defence, and looked more fluid in attack. A few Spanish players played well, but on the whole, they were not allowed to perform at their silky best by a steely Dutch outfit.

Bea Ortiz was individually outstanding for Spain, causing massive problems for the Dutch on the left-wing. Clearly she had been instructed to cut in from the wing and shoot – something she put to very good use in the match. Paula Leiton was also a handful at centre for the Spanish. It also seemed like the Spanish targeted the lob on Sarah Buis, something she struggled with today. On the whole, however, Buis was in fine form for her side – with one particular save from Paula Leiton in the first half a notable highlight.

Going into the game, you would have fancied Spain to be the favourites, especially in front of a lively crowd. But they were anything but convincing in their Semi-finals against Hungary, and have not been at their absolute best this weekend.

The Netherlands defended well in the game, and were really clinical up front. Vivian Sevenich and Iris Wolves both worked hard from the pit, and Bente Rogge converted three times before her Red Card in the second half. Sabrina Van der Sloot and Lola Moolhuijzen both attacked well, scoring important braces when it mattered.

Ahead of the match you felt it was a big test for this Dutch side, and that this contest would be a good measure how much many of their young squad had improved over the season. The win went their way, and there is no doubt that this side is in a very good place to challenge for Medals over the next few years.

Italy secured third in the Bronze medal match with a 10-9 win over Hungary, while in the fifth and sixth Play-off match this morning, Greece beat France 15-10.

The first half was evenly matched, and while Spain took a 2-0 lead, it was the Dutch who grew into the period, and ended as 3-2 winners after 8 minutes.

Spain gained some momentum in the second, and two lobs from Espar and Ortiz, as well as a stinging shot from Elena Ruiz improved the mood around the Acidalio Lorenzo pool.

The third period was nip and tuck, and there was late drama the quarter. Lola Moolhuijzen thought her second goal of the game (6 seconds from time) had given her side a lead, but Bea Ortiz scored with less than a second to pull level at 9-9 – in what was a massive boost for the hosts.

But in the last, the Dutch just found a way through while Spain didn’t – something that is rare to say about this technially outstanding Spanish side.

Spain started brightly and got two early goals to settle the nerves. Firstly Bea Ortiz’s nice dink into the pit found her fellow Terrassa teammate, Paula Leiton, who fired home off the post, before Anna Espar then also made full use of the goal frame with a really technically superb lob that dipped well to beat Sarah Buis in the Dutch goal.

The Dutch then established themselves in the game, albeit very fortuitously, as Bente Rogge’s goal-bound shot took a cruel deflection to evade Laura Ester in the Spanish goal.

Sarah Buis then made an incredible reaction save from Paula Leiton from close range, and it was just as well, because the ball was then launched long to Max Schaap, who picked out Vivian Sevenich, who then equalised with a composed finish (2-2).

The match was really heating up now, and both keepers showed why their worth. Bea Ortiz was a fraction away from giving her side the lead but for a great save from Dunaujvaros’s Sarah Buis. At the other end, Laura Ester made an instinctive double save, firstly to deny Schaap, and then Fleur Bosveld.

With 1:16 left in the quarter, Christina Nogue missed a guilt edge chance from 2m to give her side the lead on the extra-player situation.

With just 3.7 left on the clock, Bente Rogge showed some great quality to give her side a 3-2 lead after Q1. Sabrina Van der Sloot picked out Rogge on the top of the arc, and with time to measure a shot, Rogge drilled the ball out of reach of Laura Ester in the top left-hand corner of the goal.

Annie Espar won the sprint in the second, and  moments later, then tied the game up with another lob past Buis.

However, the Dutch were back ahead within the next attack from the penalty spot, after Paula Leiton found herself in uncharted territory, defending the pit. Leiton was caught wrong sided by Iris Wolves, who was fouled in the process of shooting. Simone Van de Kraats stepped up, and scored with conviction.

We had yet to see anything from Brigitte Sleeking, but she very nearly gave her side something to cheer about with a long range shot on the perimeter that was fractions wide, just clipping the post.

But the Dutch did have their fifth goal, and it was Iris Wolves, who plays her water polo in Spain with Mediterrani, who was causing the problems for Miki Oca’s side. Wolves got Nogue excluded, and tucked the ball past Ester from Sleeking’s quick ball into centre.

Spain pulled one back, and its unclear whether the Spanish team had discussed taking on the lob, but this time it was Bea Ortiz who clipped the ball to the back post – once again leaving Sarah Buis for dead.

The feeling of the game changed, and the crowd were really roaring when Elena Ruiz Barril was fouled on 6m. With no options to pass, she kicked up and bounced the ball down to the left of the Dutch goal, giving the keeper no chance.

Momentarily, the Dutch were paralyzed going forward, barely able to set up an attack. But with 90 seconds to play in the period, when the Dutch eventually calmed, Vivian Sevenich did what she does best – draw the exclusion. Sabrina Van der Sloot curled the ball out to Bente Rogge, whose driven bouncing shot gave Laura Ester no chance.

Two  minutes in, the Dutch had a double man-up (Ruiz and Espar), but Bea Ortiz saved her side with a quite outstanding block from Simone Van de Kraats.

And the blocked from Ortiz really counted, as the ball was then played long to the Spanish captain, Pili Pena, who fed Paula Leiton to smash home from centre (6-6). Leiton was really in the mood as she then grabbed her hat-trick, as Spain scored on the break-away.

Eva Doudesis sensed the next goal was imperative, and after calling the time-out, Lola Moolhuijzen made Alba Munoz pay for giving the Dutch an extra-player situation. Ilse Koolhaas swung the ball over to the left wing, and Moolhuijzen bounced the ball powerfully into the goal.

And frustratingly for Spain, it was Alba Munoz  who was once again ejected for 20 seconds. Vivian Sevenich won yet another major for her side, and this time it was ANO Glyfada’s  Ilse Koolhaas to give her side a 8-7 lead.

Spain pushed to quickly gain a parity, but Sarah Buis continued to keep her side ahead with a great save from Bear Ortiz.

It was unclear what for, but Bente Rogge was then shown a red card, seemingly because of an altercation with Paula Leiton. And Spain didn’t have any sympathy, with Bea Ortiz taking a gorgeous cross-cage shot into the far-left corner to draw her side at 8-8.

The Dutch thought had their noses ahead going into the last, as Iris Wolves dominated Paula Camus as centre, and won the exclusion for Lola Moolhuijzen to convert.

But another lobbed goal from Bea Ortiz, right on the buzzer, was a massive boost for the Spanish going into the last.

With 8 minutes left in normal time, the Dutch struck first. It was their most experienced player, Sabrina Van der Sloot, who got them to double-digits. On the left, on 5m, Van der Sloot gave her Sabadell team mate the eyes, before rifling the ball into the top far-right corner.

The Spanish, however, were level a minute later as the Dutch defence completely switched off. A good bit of movement by Irene Gonzalez saw her find space for Pili Pena to pick her out, before Gonzalez smashed home her first of the game.

The Dutch were clinical up front again and Brigitte Sleeking beat the block with a quick shot to the near post, but Bea Ortiz, who was having a field day on the left-wing, equalised for 11 goals apiece, with another deadly cross-cage shot past Laura Aarts.

With 2:42 left, the Dutch took the lead once more with a well-worked move. Maxine Schaap sent a ball high into the centre, and Sabrina Van der Sloot climbed highest to flick the ball past the onrushing Laura Ester.

The Dutch were playing with fire though, as they gave Spain a great chance to equalize with a double exclusion (Sleeking and Van de Kraats), but Annie Espar made a mess of the shot, before the ball was cleared.

Into the last minute sensing the game was here, Miki Oca called an all-important time out. It looked like Paula Leiton would set second pit, but the ball broke for Ortiz – who couldn’t find a way past the sea of Dutch blocks. Spain couldn’t find the way through, and the Dutch held on for a hugely significant win.