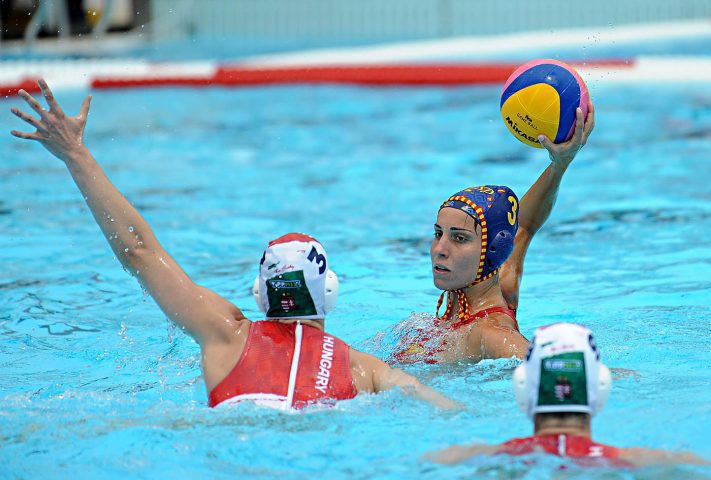 It took penalties for Spain to beat Hungary after coming back from 5 goals down in the second period. In a hugely exciting game, Spain were probably second best, but they found a way to stay in the contest, and held their nerve in the shoot-out. Spain will now meet the Netherlands tomorrow in the World League Euro Final after they beat Italy earlier today. Hungary will take on Italy.

Spain have booked their place in the World League Euro Finals with a shoot-out showdown win over Hungary.

Hungary really looked comfortable in the mid-game, but a impassioned comeback in the third period gave the Spanish all the momentum. Inevitably though in front of a vocal home crowd, the Spanish dug deep and eventually got level with some great play in the second half and eventually drew level via Bea Ortiz with just less than 4 seconds left.

The penalty shootout win that saw 18 penalties taken, with one miss for the Spanish (Gonzalez), and two misses for the Hungarians (Valyi and Leimeter).

During the match, Kamilla Farago continued to play a world class game with four more goals, while Elena Ruiz and Bea Ortiz rescued their side with a trio of goals each.

Hungary dominated the first half, and while Spain kept pace for the opening 8 minutes, after that they couldn’t find a way past the well-drilled Hungarian defence – led by the huge presence of Alda Magyari. But Hungary took their foot off the gas with needless exclusions and lapses in concentration in defence.

Hungary will probably wonder how they didn’t win the game, but in many ways it was a typical result from them, allowing their opponents back into the game and then being punished.

It has to be said that Martina Terre had a decent game in goal for the Spanish – with Miki Oca taking a big risk replacing Laura Ester for this contest.

The game started with a fierce intensity with a rollercoaster of a first period as Hungary came from 2-0 down to lead 4-2. Geraldine Mahieu took Paula Leiton out in the pit, and Annie Espar converted the subsequent penalty with style.

Spain then doubled their lead through Judith Forca. The Sabadell left-hander found herself on the point of the arc, and curled the ball past Alda Magyari.

Hungary got their game started with Dorottya Szilagyi midway through the 1st period. The Dunaujvaros attacker had space on the left, and fired past Martina Terre. Then, BVSC’s Dora Leimeter found herself in space on 6m, and drew Hungary level with a low strike on the right that bounced into the bottom left-hand corner.

Hungary then led for the first time in the match, with Dorottya Szilagyi sending Martina Terre the wrong way from a 5m penalty.

Spain had a sustained period attacking Hungary’s goal, but there was some fine defending from Krisztina Garda – who then gave Hungary a 4-2 lead with a minute to play in the period with a thunderbolt of a shot into the top-right hand corner of the Spanish goal.

Bea Ortiz had a great chance for Spain in the last moments of the 1st quarter. Natasa Rybanska was excluded, but Ortiz could only strike the crossbar in the resultant attack.

Into the second period, Hungary continued to push for goals. Krisztina Garda rifled another one of her powerful strikes into the Spanish goal to give her side early momentum.

The goalkeepers either end then showed their worth. Pili Pena had a wonderful strike saved by the excellent Alda Magyari in the Hungarian goal, while Martina Terre was equal to Natasa Rybanska’s effort from the left-wing.

But it was Hungary again who created the chances to score – and they put away three consecutive goals. FTC’s Dalma Domsodi held her own well in the pit, and Natasa Rybanska was alive to the set play to put Atilla Biro’s side 6-2 up, Kamilla Farago squirmed a shot under the right arm of  Sant Andreu’s Martina Terre in the Spanish goal before Brigitta Horvath then made it 8-2 with a good finish at the back stick.

Spain desperately needed a goal, and Paula Leiton finished well on the post as she was surrounded by two Hungarian defenders.

But no matter what Judith Forca, Elena Ruiz and Bea Ortiz threw at Alda Magyari in the Hungarian goal, the UVSE keeper found a way to deny the Spaniards.

Miki Oca knew his side needed to start the third period well. They needed to seriously create danger for the Hungarians and find a way to beat the in-form Hungarian keeper. Judith Forca did just that with a strong and convincing finish within the first attack. Paula Leiton then had a great chance to pull another back, but couldn’t quite connect with the ball in the pit.

But the momentum was now with the hosts, and Elena Ruiz made her mark on the game with a shot we have come familiar with when it comes to Ruiz – a fizzed shot from the top to pull Spain back within three scores (8-5).

Spain’s momentum was momentarily halted when VAR was consulted for a few minutes to judge whether a shot that hit the underside of the bar from Vanda Valyi had beaten Martina Terre – and the officials ruled that it had, to give Hungary perhaps a very fortunate 9th goal.

But Elena Ruiz scored emphatically for the Spaniards, off a delicate looped pass from Annie Espar, to pull the hosts back within three goals, before Bea Ortiz put away a great penalty above Magyari’s head  to make it 9-7.

And the good fortune continued to flow in the way of the hosts as Dorottya Szilagyi missed a penalty off the right-hand post at the other end.

There was a big moment in the last period as Hungary scored first. Kamilla Farago’s really powerful shot hit the bar before dropping in behind Martina Terre. The goal once more restored Hungary’s three-goal lead.

But with four minutes to go, Zsuzsanna Mate gave Spain a penalty that the experienced international, Bea Ortiz, tucked home for her second of the day, to put the score at 10-8.

With Hungary growing more ill-disciplined, they were giving more exclusions away. And when Dora Leimeter was sent out, Annie Espar launched home a goal to now bring Spain back within a single goal (10-9).

Kamilla Farago managed to squeeze the ball home for Hungary to restore the two goal cushion, but it was cancelled out by a simply breathe-taking finish from range by Judith Forca Ariza.

And then, to send the crowd in Santa Cruz into pandemonium, Elena Ruiz equalised with 1:24 to go. On the left, she wound up to shoot, and left fly towards Alda Magyari’s near post for her third goal of the game.

But the outstanding Kamilla Farago, who has had a really fantastic season for club (UVSE) and country, scored to silence the crowd. On the right, she faked twice, before rifling the ball into the roof of the Spanish net.

Miki Oca had one last throw of the dice when Krisztina Garda was excluded. He called the timeout, and with just 3.7 seconds left, Bea Ortiz levelled the game up with a powerful bouncing attempts into the left-hand side of the Hungarian goal.

And so, as nothing could separate the two teams in regulation time, we were heading for a penalty shoot-out.

Up first, it was the hosts Spain and Annie Espar made no mistake. Kamilla Farago, who netted 4 in the game, was equally as assured in her penalty.

Ortiz and Garda were up next, and both made sure from 5m.

However, Irene Gonzalez could not beat Alda Magyari – who got down low to her right to keep Sabadell’s in-form player out.

Vanda Valyi was nearly denied, but made sure she found a way to give her side the advantage in the shootout.

Judith Forca, Ruiz Barril and Dorottya Szilagyi all made sure, which meant it was down to Dora Leimeter to win the match – but she could only find the cross-bar.

And so back to the first takers, Annie Espar and Kamilla Farago made no mistakes again. Ortiz rifled her second penalty home, as did the cool customer that is Krisztina Garda.

At the second time of asking, Irene Gonzalez was on target, but Vanda Valyi, who scored her first, could only hit the bar, giving Spain the win.