Pro Recco has become the European champion for the 9th time!

Recco defeated Ferencvaros 9:6 in the final game of the F8 Champions League tournament in Belgrade and returned to the throne after six years.

Today was a great day for Italian water polo. Brescia won 3rd place, with a convincing 13:7 victory over Barceloneta in the bronze-medal game. Jug defeated Hannover in the match for 5th place (16:11). Olympiacos edged out Marseille (13:12) and finished 7th. 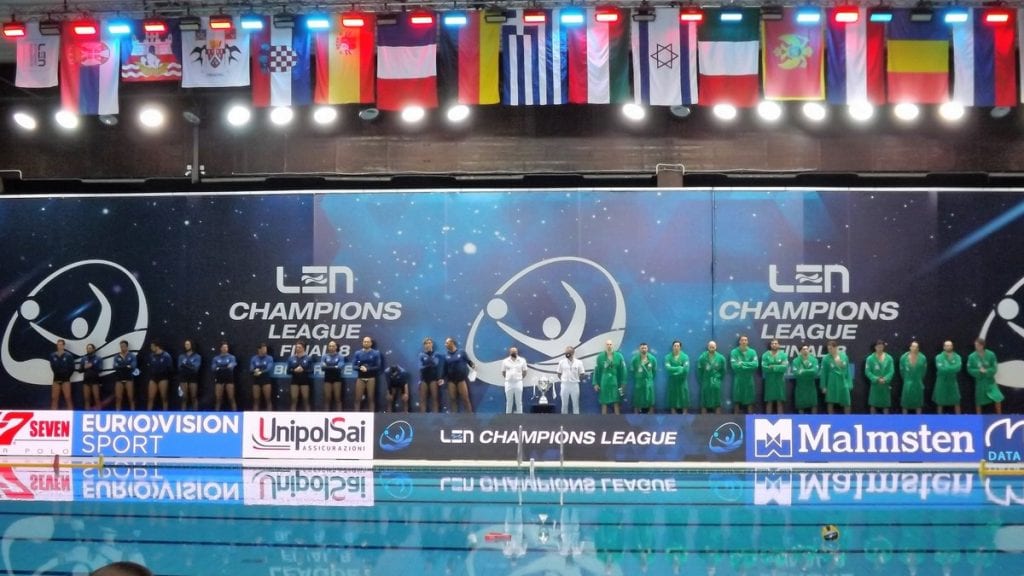 Ferencvaros entered the match with 12 players. Tamas Sedlmayer was suspended for brutality in the semifinals against Brescia. He didn’t receive the red card yesterday, during the match, but the LEN Technical Water Polo Committee suspended Sedlmayer after video reviews.

Recco took an opening 1:0 lead, but the Hungarians turned around the deficit to a 2:1 lead. However, that was the only Ferencvaros’ lead in the match.

Dusan Mandic leveled at 2:2. After that, Ferencvaros missed a double man-up – Marko Bijac, saved a shot from Zalanki. Bijac was one of the best players of the game (68,4 saving percentage -13 saves/19 shots). On the other side, Vogel posted 11 saves (11/20).
The Hungarians paid for the wasted chance. In the next possession, Recco had a 6 on 5. Figlioli scored for 3:2 in the 7th minute and closed the first quarter. 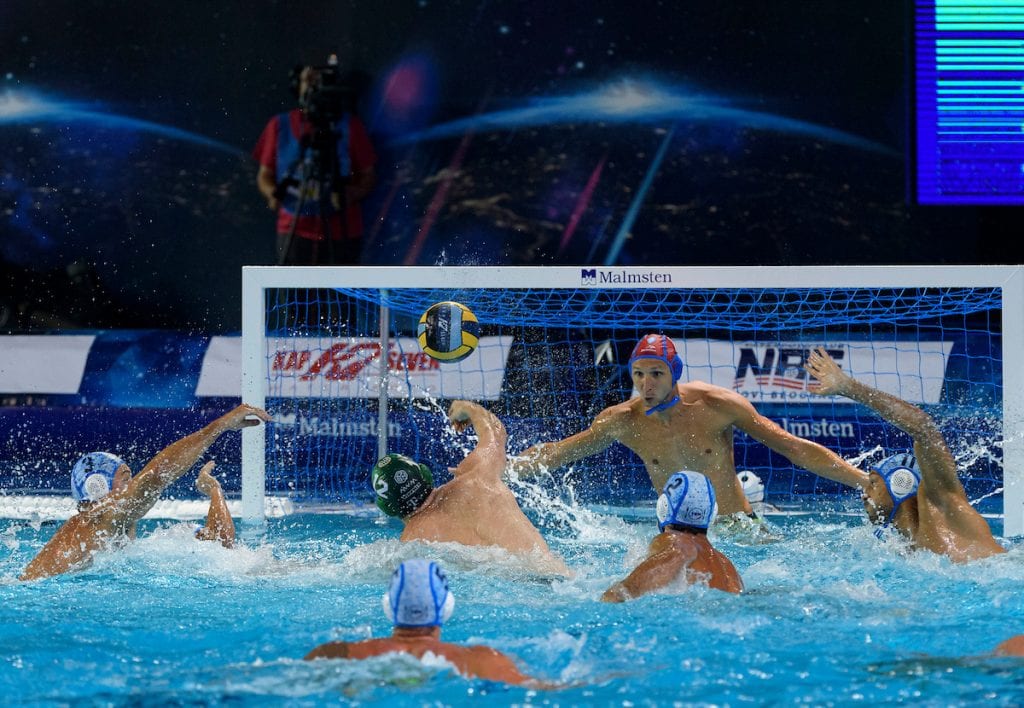 Vendel Vigvari converted a man-up at the beginning of the first quarter to equalize – 3:3. Pro Recco took the lead twice in the second quarter, but Ferencvaros equalized on both occasions.

At halftime, the score was 5:5. There were many personal fouls in the first half – 22 (11 exclusions for Recco and 11 for Ferencvaros). That was a bigger problem for Ferencvaros than for Recco, since the 2019 champion started the game with 12 players. The lack of available players for rotation (a “short” bench) was one of the factors that made the difference in the second half of the game.

Already in the first minute of the second half, one of the Ferencvaros’ best players Fountoulis finished the match because of the third exclusion. Echenique converted that man-up to a 6:5 lead. Dusan Mandic scored an admirable action goal in Recco’s next possession and the Italians went 7:5 up.

From the middle of the third quarter, Ferencvaros had only 10 available players (8 field players and two goalkeepers), because Mezei committed the third personal foul, and the game was over for him.

From that point on, Ferencvaros couldn’t keep up with Pro Recco. The Hungarians defense’ worked well in the last four minutes of the third quarter, but the offense wasn’t on a high level. The Hungarians couldn’t find the net and narrow the gap.

Ferencvaros’ best scorers – Denes Varga, Gergo Zalanki, Marton Vamos were stopped by Recco’s defense this evening. Only Vamos managed to score (1/8), while Varga and Zalanki had four missed shots each.

In the 28th minute, Dusan Mandic scored his third goal this evening, and Recco stretched the margin to three (8:5). Everything was decided three minutes before the end, when Francesco Di Fulvio converted a 6 on 5 for 9:5. There was no way back for the Hungarians.

Three minutes before the final buzzer, Nicolas Constantin Bicari scored a consolation goal for Ferencvaros and ended his team’s goalless phase that lasted for almost 16 minutes. 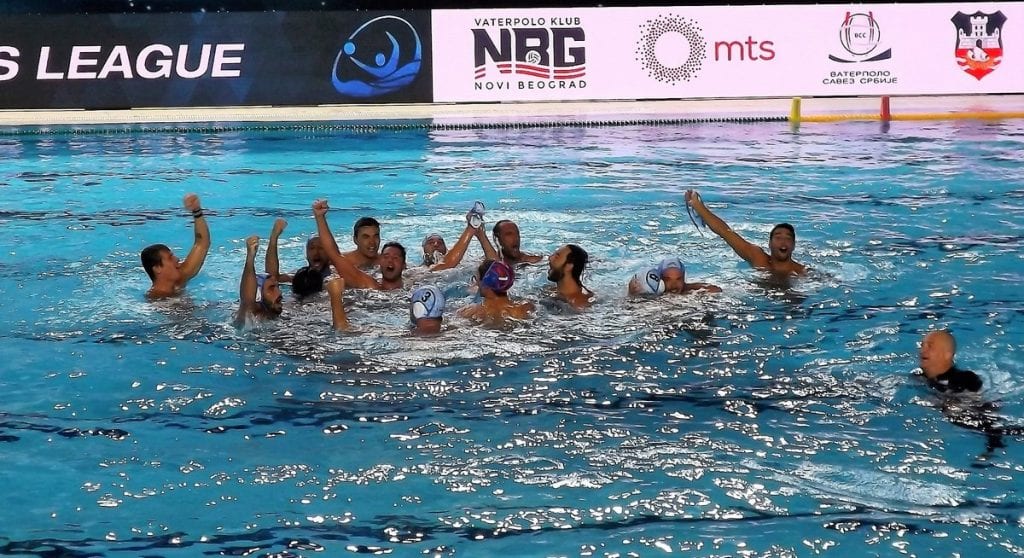 Recco’s left-handed goal-getter Dusan Mandic was voted the MVP of the tournament. 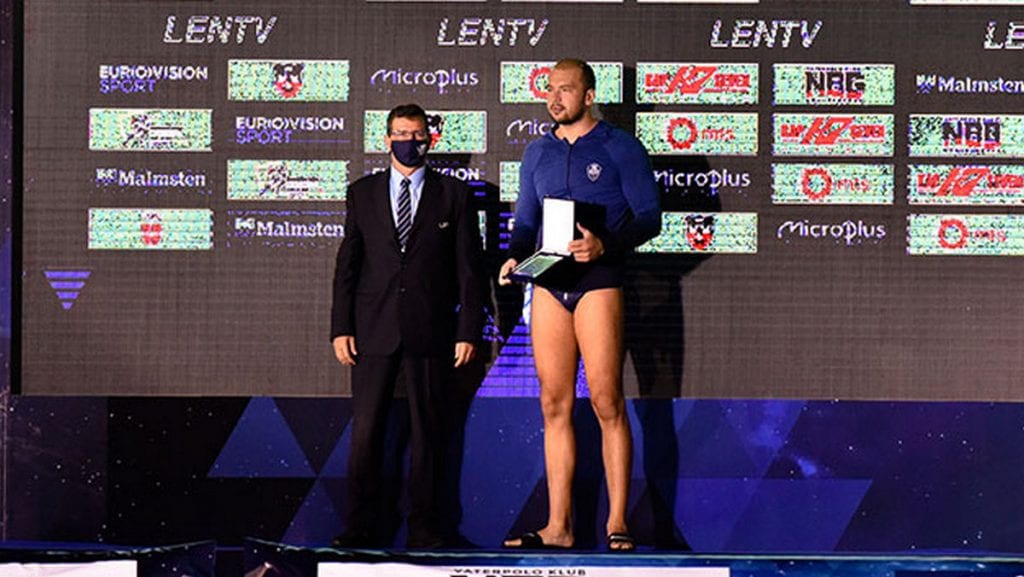 This is Mandic’s second Champions League title after ten years. He climbed the Europen top with Partizan in 2011. After the triumph Mandic said:

“It has been long time coming. I came to Recco six years ago, the last season was cancelled so we have been waiting for this for five seasons. The feeling is unbelievable. This was such a specific season. We experienced a shock after losing to Brescia in Italy. It was not a nice or pleasant period for us. We got together, looked in the eyes of each other and worked it out among ourselves. Trust me, it was not easy but we rose to the challenge. We are overjoyed. It is not a problem to lose a game but how we lost to Brescia left us with a bad feeling we needed to wash away. And we did it. We proved to be real champions. Now Recco is up to 9 Champions League titles, more than Partizan and Mladost, both of which are water polo greats.” (source: LEN Press Release)

It’s rumored for a while that Mandic is targeted by Novi Beograd, the host of the F8, and that he could sign a contract with the Belgrade-based team.

“As for that, we will wait for a while and see what will happen”, Mandic commented in an Interview for TV Sport Klub 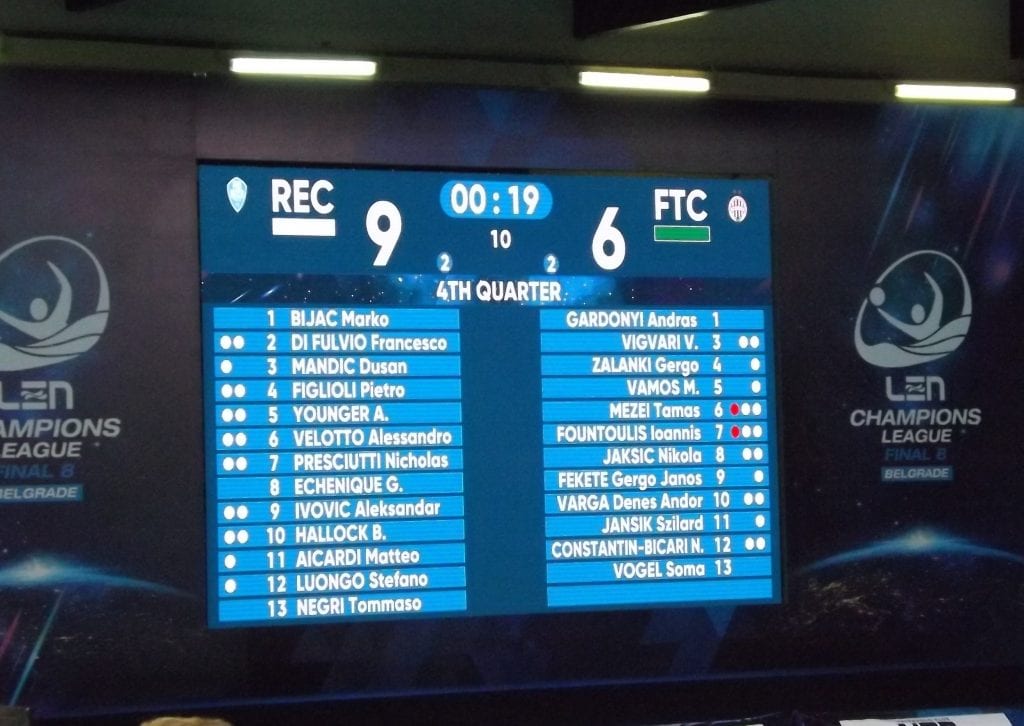 Gabi Hernandez, who has been coaching Pro Recco since last year, won two trophies with the Italian club in his first season on Recco’s bench (Italian Cup and Champions League). After winning the European crown, he said

“This a great win for this club and a well-­‐deserved one as I think we played really well during these three days, in all three matches. I should thank the efforts first of all to the players who did a great job, also to my staff, our president Maurizio Felugo and our owner Gabriele Volpi, their support was outstanding in this season. I think today it was our intensity, especially in defence, which brought this victory. When I say intensity, it’s about the intense, aggressive but not brutal defending which worked really well in this match.” 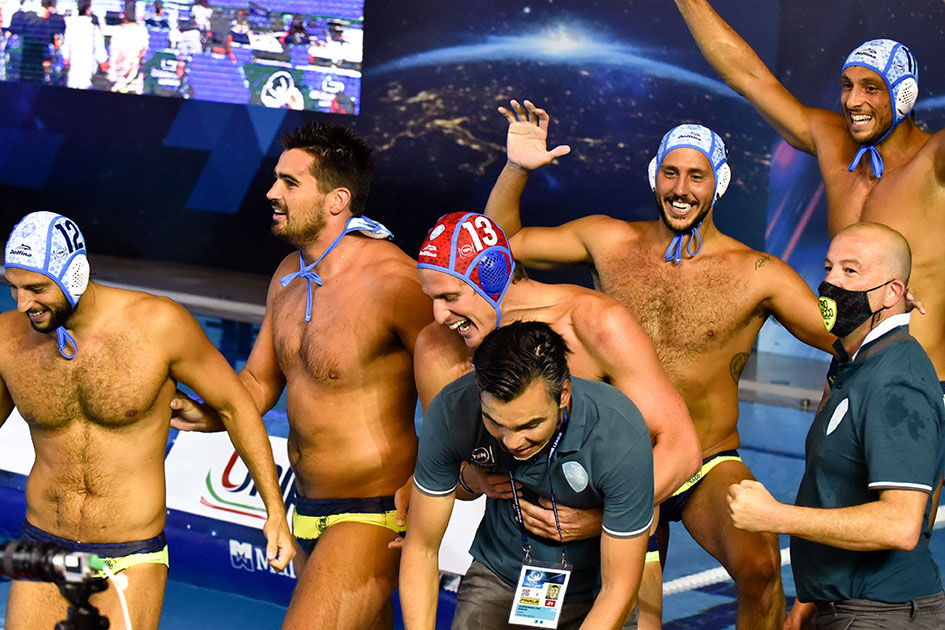 “Of course, losing a game never makes you happy but I should say I’m still pretty much proud of my players at the end of this extraordinary and sometimes brutal season. We went through grueling periods, were hit by Covid and injuries not just once but still, we were able to pull ourselves together and came up with two great wins here. For today, we didn’t have enough power to play a game of that intensity, packed with loads of exclusions and to have one field-­‐player less due to that disciplinary case from yesterday. In fact, Recco has a longer bench of physically fully prepared players while we have two very young guys who developed significantly in this season which means a lot for the future, but today it wasn’t easy for them to keep the speed and stay firm in the battle. I knew Recco was playing with more confidence when they were in the lead – we could hold on till halftime but a couple of misses, in a 6 on 4, then in that 5 on 4 had already told me the bad news that the psychology of the game was changing as Recco seemed to got extra energies from those moments. And it happened, my guys were too tired to break their defence again and again – so we have to settle for this silver. Still, we can be really proud of this.”

“Sacrifice, a great sacrifice is the first thing that comes to my mind. This team has been in pursuit of this trophy for five years. It was always missing all these years. We were favorites but always failed to come to the end. Hard work and sacrifice, disappointments included is what brought us here today. I am extremely proud of our team for finding the inner strength to start afresh, always finding new ambitions, goals to fulfill. Good things come to those who wait I guess… I am over the moon… I want to thank everyone, the team, our president, the staff, everybody who was there for us day after day, along this road to success.”

Barceloneta opened the tournament in Belgrade with a fantastic win over Olympiacos (22:9). Yesterday, the Spaniards fought a hard battle with Recco, but they finished the tournament with a disappointing performance, especially in the first two quarters.

Brescia had more motives to win the bronze medal, and that was obvious in the first half. The Spaniards scored an opening goal, already in the second minute (Famera). But after that, Brescia ruled the field. The Italians, led by Angelos Vlachopoulos, produced a 7:0 rush for a 7:1 lead in the middle of the quarter. Barceloneta’s coach then changed goalkeepers. Brazilian Coimbra replaced an experienced Lopez. Still, everything was practically decided at that moment. Barceloneta couldn’t come back.

Brescia kept a 6-goal distance until the middle break (9:3). The second half of the game was balanced, and Barceloneta avoided a debacle.

The best scorer was Angelos Vlachopoulos, who played his last game for Brescia today. He moves to Belgrade. In the next season, he will play in the pool SC “11 April”, which is the venue of the F8. He signed a contract with Novi Beograd.

Marco Del Lungo, Brescia’s goalie did a good job today, as well as in the quarters and the semis. He left the field two minutes before the end. His teammates gave him a round of applause for the good performances at the F8, for a “goodbye”, and to wish him luck in the following years. Del Lungo will also leave Brescia, and join Pro Recco after the end of the season. 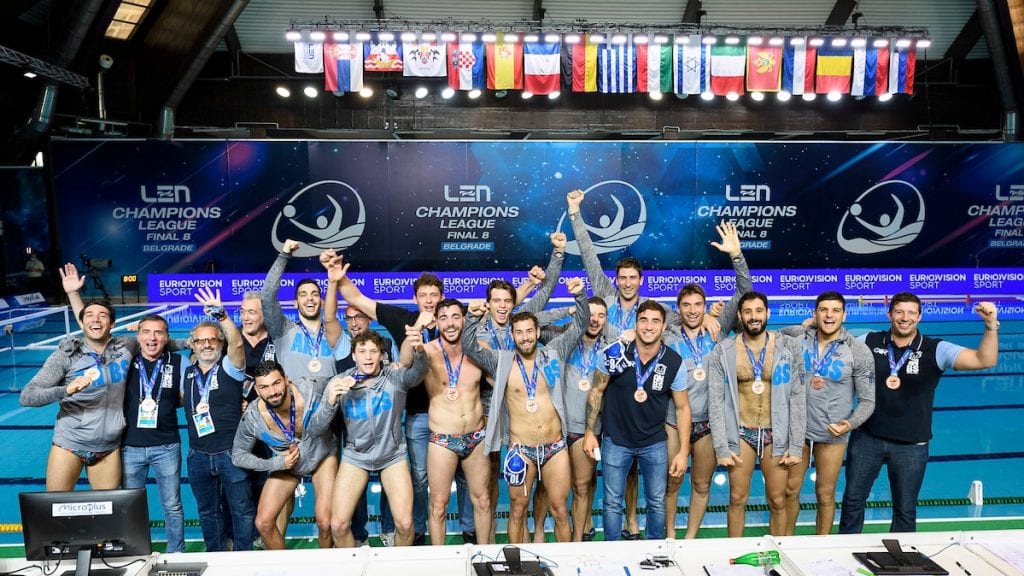 Brescia had only 12 players in the line-up because Djordje Lazic was red-carded for unsportsmanlike conduct at the end of the semifinal match against Ferencvaros. The LEN TWPC suspended Lazic after a video review.

“As usual, after a lost semi-­‐final it’s really hard to play this game, especially when you played such a tiring match as we did with Recco. Also, Brescia was really good today, we didn’t have much chance to keep up with them. This can happen sometimes. We had a very great game against Olympiacos and also did well against Recco until the middle of the third period. It’s not easy to play with these two Italian sides within 24 hours. I’m sorry that this ended this way, this was my last game as the coach of the club, but I’m very happy for what we have achieved with this team in the past years.”

“This is a great result for this club, to claim this bronze medal and to win this match in the way we did. It’s not easy to play against such a great team as Barceloneta, they are excellent, so this is a great achievement. I’m really satisfied with this season.”

Matches for the final standings