The Serbs defeated Greece 13:10 in the big final of the men’s Olympic water polo tournament and won the fourth Olympic medal in a row.

Serbia debuted, as an independent country at the Olympic Games in 2008. Since then, the Serbs have won a medal at each tournament – bronze medals in Beijing and London and titles in Rio and Tokyo. Three players participated in winning all four medals: captain Filip Filipovic, Dusko Pijetlovic, and Andrija Prlainovic. They were among the best players of the gold-medal game. 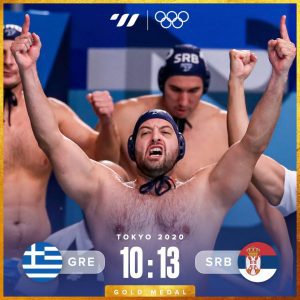 Goodbye to the national team in a great way: Filip Filipovic Photo by Marcel ter Bals

The Greeks shouldn’t be sad. They won the first-ever Olympic medal for their country in men’s water polo. They played an excellent tournament, and arrived in the final unbeaten. They showed their quality in the final too. But, they lost in the great battle with an experienced Serbian team.

The match was a balanced battle until the middle of the final quarter. Serbia secured a win with a 3:0 series in the fourth period.

Serbia went to 3:1 already in the 3rd minute, after Rasovic scored an action goal. But, after that, referees stopped the game for a VAR review. In Greece’s possession that preceded Rasovic’s goal, Branislav Mitrovic saved a shot from Kolomvos. But, after a review, the referees said that the ball crossed the line after the save, and the Greeks equalized – 2:2. Rasovic’s goal was annulled because it came after the reviewed situation.

Then, Serbia responded with three goals (Jaksic from an extra player, Filipovic from a penalty and Pijetlovic) to jump to a 5:2 lead.

After a quick exchange of goals in the first minute of the second period, Serbia had a 7:4 advantage. But, the Greeks finally managed to find their defensive play, which led them to the final. They started playing well in offense, as well, and produced a 3:0 series. In the 12th minute, Alexandros Papanastasiou found the net from the right side and leveled at 7:7.

That was a wake-up call for the Serbs. Head coach Savic called for a time-out. But, the Serbs didn’t find their rhythm after that pause. There were no goals for a while. Both teams failed to convert their man-up chances. Still, Andrija Prlainovic scored from a power-play advantage just four seconds before the middle break, and the Serbs went in front (8:7). 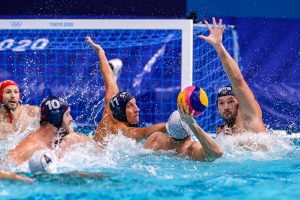 Early in the third period, Mandic scored from the deep right to double Serbia’s advantage (9:7), but Mourikis responded immediately. In the 21st minute, the Greeks caught up with the Serbs once more, after Fountoulis converted a 6 on 5 (9:9). Still, Serbia had a slim advantage before the final period. Just 71 seconds before the last break, Prlainovic found the net after Filipovic’s assist for 10:9. In the last second of the third, Genidounias hit the post from a distance.

Greece didn’t equalize in the finish of the third period, but they opened the fourth period with a power-play goal by Skoumapkis for 10:10. However, after that, Serbia’s defense was outstanding.

In the remaining time, Serbia scored three goals. The Serbs forced a penalty shot in the 26th minute. Andrija Prlainovic sent the ball into the net from the 5m line for 11:10.

Shortly after, Serbia’s center-back Nikola Jaksic found the net for 12:10 lead from the center-forward position, after a nice team action with a power-play advantage. In the middle of the quarter, Dusan Mandic’s “bomb” gave Serbia a 13:10 lead.

In the final minutes, Serbia had problems with a big number of exclusions. Two defenders Sava Randjelovic and Milan Aleksic were out because of three personal fouls. Still, the Olympic champions’ defense worked perfectly. The Serbs killed Greece’s man-up at 01:51 and that was the end of the contest. There was no way back for the Greeks, whose coach Vlachos called a time out shortly after, but it was too late. Serbia won the title! 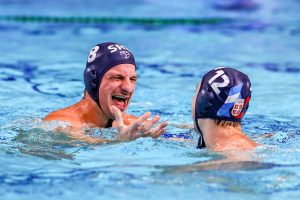 “At this moment, only the Olympic gold is important, No matter how we played throughout the tournament. It’s not important now. Feeling after winning the second Olympic title is incredible. I congratulate the players, the Water Polo Federation, everybody who contributed this gold. I have nothing to say more. This is one of the moments when I have to become silent”, Serbia head coach Dejan Savic said in an interview for the Serbian national television immediately after the game.

After the medal ceremony, he spoke to Serbian media in a mixed zone:

“I am happy for this generation that won’t grow further. I can’t talk about it now, because we have to enjoy this. The psychological element was the most important in the way to the title – everything that these boys have endured since their childhood, through growing up and through the national team, and of course, in the last eight years with me. It wasn’t easy. Now everyone understands how it is for my wife”, Savic said in his joking style.

Dusan Mandic, a leader of a new generation, commented:

“This medal is for the seven players who retire from the national team. They were my teammates in the Serbian team for 10 years. They were my older brothers, fathers. I thank them for everything I learned playing and training on the same team with them. I learned from the best.”

Asked if it’s harder to win or to defend the Olympic gold, Andrija Prlainovic answered:

“It isn’t easy to answer. We had to pass several very high hurdles on our way to the titles both in Rio and Tokyo. Defending the Olympic title is a great thing. There are no many teams that managed to achieve that feat. Congratulate to my teammates and thanks to our fans and everybody who was with us, who supported us.”

Vanja Udovicic, the Minister for Youth and Sport in the Serbian Government and Serbia’s former captain, was in the stands of the Tatsumi Water Polo Center today. He congratulated his former teammates, head coach Savic, and all others:

“The dream of these guys came true five years ago in Rio de Janeiro when they won their 1st Olympic gold. Five years after that achievement, they proved that they had a continuity of success. They became legends and are great role models for new generations of athletes.”, Udovicic said among the other things.

“Who would have thought that we would take the silver and not to be satisfied… We did not manage the game well at the beginning and at the end. It was not easy against such an opponent. We conceded 13 goals, more than in any other match in the tournament. We played against a great opponent, which won a second consecutive gold. I want to thank the players, they were fantastic. We have done a lot of things now that we are done, we have created memories, we have written history… Climbing the podium of the Olympic Games is a supreme honor and pride. This team has a long future” (source koe.org.gr).