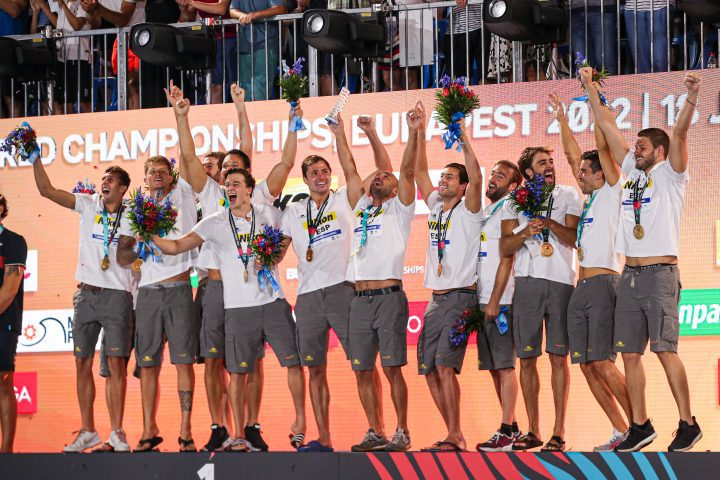 Spain returned to the World water polo throne after 21 years.

Spain defeated Italy in an exciting final of the 19th World Championships in Budapest. The thriller ended after a penalty shootout – 15:14 (9:9 in the regular time).

The Italians had a chance to become a second team to defend the gold medal at the World Men’s Championships (only Spain achieved that feat in 1998 and 2001). But, Spain took revenge for the defeat in 2019 final.

The Spaniards have played in four big finals in the last four years. They lost two finals at the European Championships (to Serbia in 2018 and Hungary in 2020) after a penalty shootout. Italy was better in Gwangju after four quarters. Finally, Spain managed to break a row of penalty losses in the big finals and deserved the title.

As usual, there were several title contenders. Spain’s advantage at the 19th World Championships maybe was an experience. They haven’t suffered many changes on the roster since the Tokyo Olympics. Eleven players who won 4th place in Tokyo played in Budapest. Italy, Croatia, Serbia and other favorites changed significantly more players. Five of Italy’s 13 debuted at a major competition. 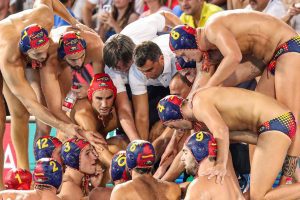 Despite the loss, Italy remains the record-holder as the only male team with four gold medals at the World Championships (the list of the medal winners is at the end of the article)

The final was the second encounter between Spain and Italy at the 19th World Championships. Their clash in the group stage was a real rollercoaster, with many ups and downs, and Spain recorded a 14:12 victory..

Today’s match was a different story. There were ups and downs, and a big comeback in the final, but Italy was never in front. It leveled the score just twice (3:3 and 9:9). Spain had a 4-goal lead in the third period (7:3 and 8:4). It led 9:6 at the beginning of the fourth quarter. However, Italy came back, equalized at 9:9 and the match entered a shootout. The penalty drama ended after seven rounds. Canella failed to score in the shootout twice. At the other end of the pool, Munarriz missed. Other scorers in the shootout found the net, and Spain became the ruler of the water polo world.

As for individual awards, Felipe Perrone was voted the MVP of the game by FINA’s jury. His teammate Unai Aguirre was picked as the best goalkeeper of the tournament. Aguirre’s performance was great in the final. The best scorer of the Championships, with 21 goals, is Alex Bowen (USA). 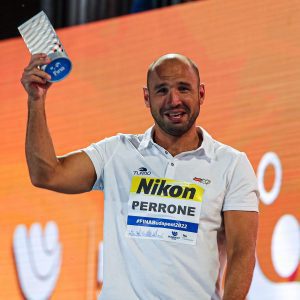 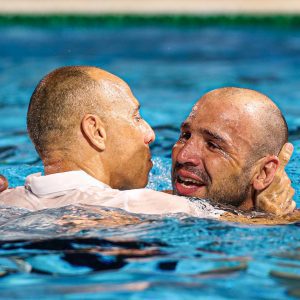 Spain had an early 2:0 lead and earned a 3:1 advantage in the middle first period. However, the Italians caught up with the rival with two power-play goals in the last minute of the period (Cannella and Bruni). So, before the second quarter, the finalists were at a new beginning.

Granados opened the second quarter and put his team ahead again. The Spaniards had a double man-up. Granados didn’t miss that great opportunity and made 4:3. A few minutes later, Granados found the net from almost the same place, with an extra player to give Spain a 5:3 advantage. 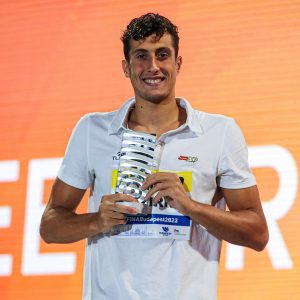 In the 15th minute, Spain went to 6:3. It was a 6 on 5 attack again . Centre-forward Roger Tahull hit the back of the net after Felipe Perrone’s excellent assist.

The third quarter started with a quick exchange of goals. After 20 seconds of play in the second half, the Spaniards had a 4-goal advantage. Perrone scored for 7:3. Marziali responded with a man-up. But, in the next attack, the Spaniards earned a new double extra player. Granados took responsibility once more and netted for 8:4. But, a new response came immediately. Cannella scored from a 6 on 5 (5:8)

Gianmarco Nicosia replaced Marco Del Lungo in front of Italy’s goal, after 3:7. That change helped Italy consolidate its defense, but the attack still didn’t work well. Their percentage of shots was still low. A minute and 30 seconds before the last break, Andrea Fondelli converted a man-up for 6:8 and gave Italy hope that it could come back. 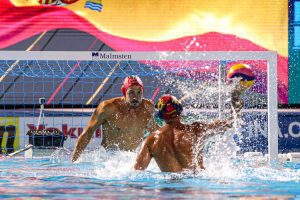 The fourth quarter began in the same way as the previous three periods. Spain scored an early goal, again with a power-play advantage – Famera 9:6.

In the 26th minute, someone in the Spanish coaching staff accidentally pushed a time-out button. The referees analyzed that situation with the VAR technology. They concluded that the Spaniards made a mistake – Spain had called time-out during Italy’s possession. Therefore, a penalty shot was awarded to Italy. Francesco Di Fulvio sent the ball into the net from the 5m line and scored his first goal in the game (7:9).

That penalty was a turning point and the beginning of Italy’s series of goals. At 02:59, Dolce scored an action goal for 8:9. In the next possession, Spain lost the ball. At the other end of the pool, Nicholas Presciutti made no mistake and Italy equalized for the second time in the match – 9:9. There were no goals in the remaining time. Spain earned a power-play advantage with 35 seconds to go, but the Italians stole the ball 12 seconds before the end. They didn’t have enough time to prepare a proper attack and the game entered a shootout.

The big loser of the penalty drama was Giacomo Cannella. In the 2nd round, Aguirre, who played another great match, blocked Cannella’s shot. But, at the other end of the pool, Munarrizz missed. After five rounds, both coaches switched goalkeepers. The decision came in the 7th round when Spain’s second goalie Lorrio saved a shot from Cannella and Spain started celebrating the gold medal. 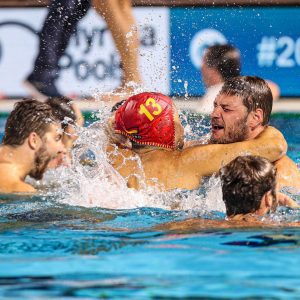 FOR RESULTS, AND STATISTICS VISIT THE TOTAL WATERPOLO ARENA