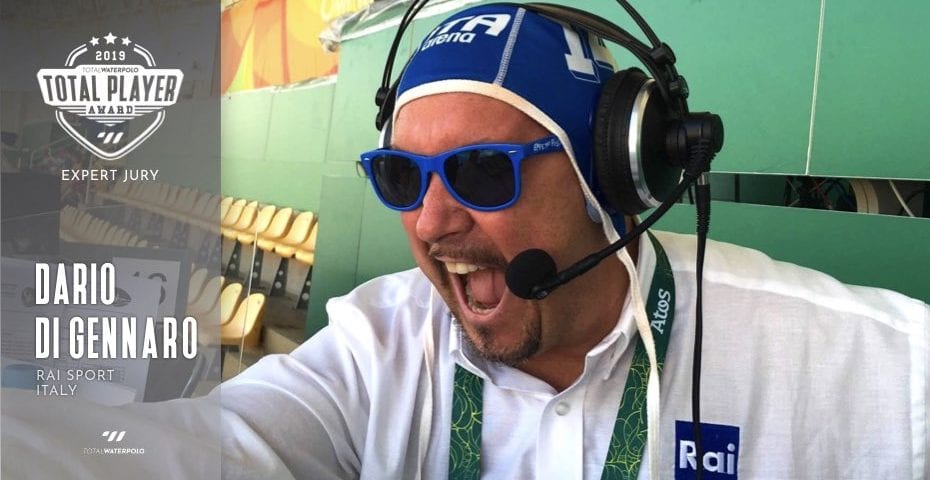 Dario Di Gennaro, the voice of Italian water polo and RAISport commentator, makes his debut in our Media Expert jury. We want to take this opportunity to thank Dario for his contribution to water polo in Italy and we hope you will enjoy reading his opinion for this year’s Total Player Award.

“The Italian most valuable player, Francesco Di Fulvio has reached maturity and awareness of his qualities: speed, cunning, shooting, careful defense. In the Italian victory at the Gwangju World Championships, he made a decisive mark. World Champion, Italian Champion and excellent performance in Champions League”

“It’s always a poem to see him play. He is a silent leader. When Denes Varga is in the pool, the Hungarian national team is a formidable, confident team… as if his qualities were distributing to his teammates and the whole team benefits. European champion with Ferencvaros and Champion of Hungary. If he could have played the World Championship without an injury, it would have been a pain for every opponent.”

“It was very hard to make you forget Stefano Tempesti … Marco Del Lungo freed himself from the burden of this responsibility and now it’s very difficult to beat him.“

“The universal player of Montenegro would need a camera only for him, to follow his agile movements in defense, his rides in attacks, the ability to read game situations at any time of the match … a camera dedicated to all his movements would be the best water polo lesson for young players. He’s Italian champion with Recco, he will be the leader of Montenegro at the next European championship to reach the Olympic pass.”

“Her return to the national team was formidable, an impact with the devastating world for opposing defenses. She started from where she left off and today Spain has a striker like few others in circulation. Tarrago can undermine any defense.”

“Her presence in the water is an absolute guarantee of joy. Exceptional physical qualities, the defense moves according to her indications and her parades, in the end, seem so simple. She has an incomparable elegance, an unparalleled leg power. With Ashleigh, the companions play quietly, defend with the right serenity. And now that Krikorian is rehearsing her even in the attack, we discover her flexibility as an athlete.”

“If on the right there is Tarrago, on the left there is Espar, but not only on the left. You find her on the poles to attack the depth, you find her in defense to spend on more opponents. How she sees the opponent’s goal is the excellence of a true athlete. If Tarrago is the champion, Anna Espar is the soul of the Spanish national team and having left Sabadell for Mataro gave her a new stimulus and a new polish.”

“Australia’s returning to the world podium is reflected in its presenter. Great shot from distance, asphyxiating markings, great physique. I am convinced that the Gwangju bronze has given all the Aussie Stingers the awareness of being a podium team at the Tokyo Games, and Webster’s look certifies this feeling of mine.”

“The Hungarian captain can never miss in a Top5. Her high-class shots and solutions go beyond the game of the Hungarian national team. Instinct, intuition, character, determination, malice, class and intensity, there isn’t coach in the world who would not like to have Rita Keszthelyi in their team.”