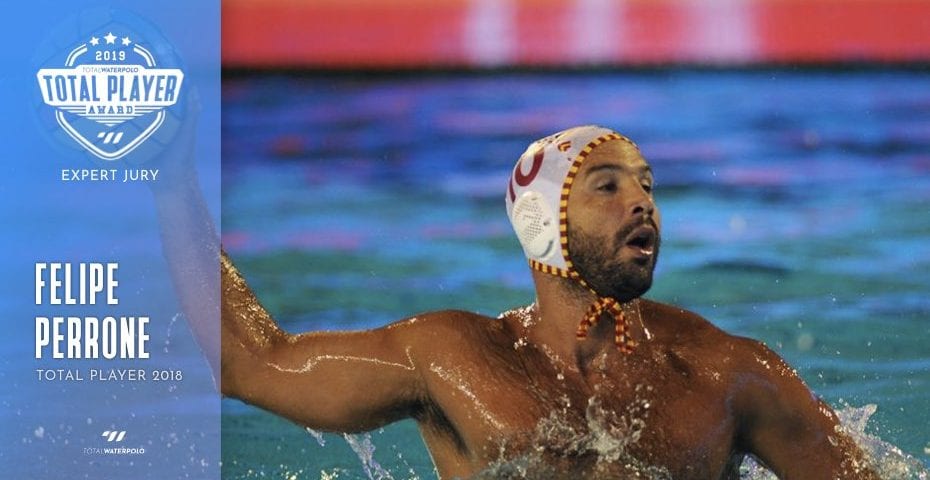 Today we welcome Felipe Perrone, who is our Expert juror for the first time!
He deserved a place in the Jury as the winner of the Total Player 2018 award.
Perrone is not just one of the best, but one of the most popular water polo players in the world at the moment.

This year was one of his best in a long career. He clinched the silver medal at the World Championships in Gwangju. That was his second world silver with the Spanish team, after Rome 2009. He has won more than ten medals at the major competitions, playing for Spain and Brazil. Perrone won three Champions Leagues with three different clubs: 2012 (Pro Recco), 2014 (Barceloneta) and 2016 (Jug Dubrovnik). Since 2017, he has been playing for Barceloneta again.

“He was definitely the best center forward in the world during the last season. No one could move him out of 2 meters and this is a joy for every teammate.”

“He showed all his qualities during the season and led Ferencvaros to win the Champions League. He had many amazing performances. Unfortunately, he got injured during the World Championship.”

“He was the best player at the World Championships. I think that all spectators would like to see players like him, always moving, driving and scoring counter-attack goals.”

“He plays with an amazing passion. His semi-final against Croatia was an unbelievable performance bringing Spain back to a World Championships final after 10 years.”

“He didn´t ‘play the main competition of the season but he did an epic World League final qualifying Serbia for the Olympic Games. It has already been many years that he has been scoring many decisive goals.”