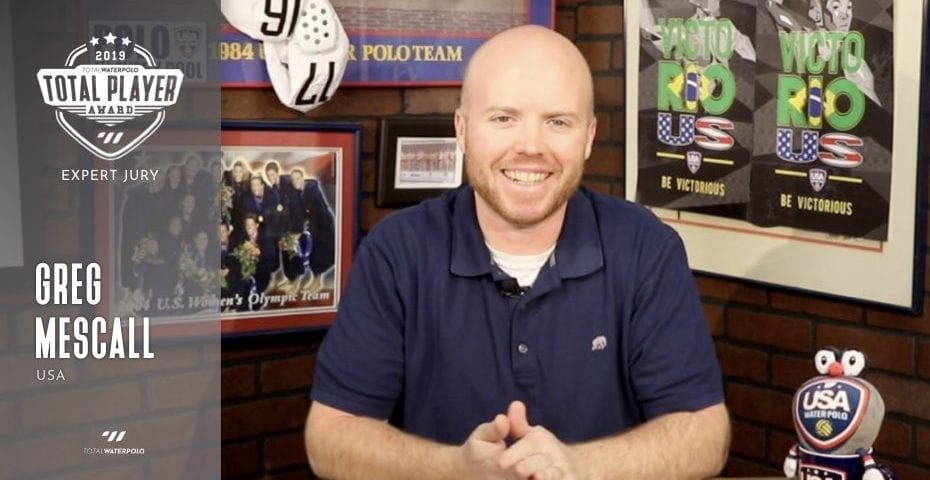 Greg Mescall is a sports broadcaster based in the United States that calls a variety of sports for different networks including water polo, basketball, football, soccer, volleyball and more.

Considered the voice of water polo in the United States, Mescall calls a host of collegiate action including the NCAA Championships and multiple international events including USA National Team matches and FINA World Championships.

He is the host of the USA Water Polo news program, the #CounterAttack.

“Part of the Serbian team that qualified early for Tokyo and sat out of South Korea but remains one of the most fun to watch and best in the world. Super quick release, blink and you’ll miss it.”

“An expert in creativity no matter the team he plays for and was of course last year’s total player. Can score in bunches and is super dangerous on the counter attack.”

“Part of an exciting core for Team USA full of young talent. Had the team lead in Gwangju with 14 goals scored and then played through the injury in a gold medal run at Pan Am Games. Crafty attacker who has excellent leg strength and can elevate.”

“A big part of Italy’s attack, he helped the team to gold this summer in Gwangju. Second on the team with 10 goals scored and will be essential if Italy hopes to reach the top of the podium in Tokyo. A theme on this list as another Pro Recco selection so gets regular experience with high stakes matches.”

“Goalies don’t get enough love and this Bijac is one of the best. Has experience among the best both with Pro Recco and Croatia and at 28 years old still has plenty of time to dominate. Great size in cage at 6’7″ with added mobility make him tough to beat.”

“ A team full of top talent, Musselman bounced back after missing time in 2018 to help Team USA sweep all the golds. Her lob shot is no joke.”

“Continues to be considered the top goalie in the world by many, took the summer of 2017 off but is back to form ahead of Tokyo. Makes super athletic stops few other goalies can replicate.”

“Has been a mainstay for Australia for a number of years keeping that team among the medal contenders annually. Versatile player that does many things well.”

“Hungary is always known for great shooters and Rita is no different. Piled up the goals this summer at Gwangju including five in that 64-goal outing. “

“Dangerous on both ends of the pool, good size and athleticism and has proven to be super valuable both in international competition and in the collegiate game in the United States. “