Italy men’s national team became the world champion for the first time since 2011. The Italians defeated Spain 10:5 in the final of the 18th World Championships in Gwangju to clinch their 4th world crown. Before Gwangju, Italy was the champion in 1978, 1994 and in 2011.

This was the fourth silver for Spain, and the first medal at the WCH after the 2009 World Championships in Rome, where they were also 2nd, as they were defeated by Serbia in the final after a penalty shootout. It’s interesting, Italy claimed its previous crown by beating Serbia in the final.

Few could predict this outcome, but the gold is a well-deserved medal for Italy, as it recorded 6 wins in as many matches in Gwangju. The 5-goal gap was their biggest margin-win in Gwangju after a 14:5 victory over Brazil on Day 2. Other matches they won by a goal or two.

Today, Italy dominated the second and the third quarter, which was vital in the win.

Italy’s captain Pietro Figlioli received the award for the MVP of the tournament. His team-mate Marco Del Luongo was named the best goalkeeper. Aleksandar Ivovic (Montenegro) was the best scorer, with 21 goals. Figlioli and Ivovic are team-mates in Pro Recco.

Italy was leading 1:0 and 2:1 in the first period, but the sides were tied after 8 minutes. In the finish of the period, Spain had a great chance to take its first advantage. They forced a penalty 23 seconds before the break, but Del Luongo, one of the best players of the final game, blocked Barroso’s shot.

The Italians built a 3-goal lead (5:2) by the middle of the 2nd quarter (Figlioli, Dolce, Iodice). Spain earned a new penalty 57 seconds from the middle break. This time, Munnariz sent the ball home and Spain came back into the match.

Italy ruined all the Spaniards’ hopes in the 3rd period. They produced a new 3:0 run. Mateo Aicardi opened the quarter with a goal for 6:3. Vincenzo Dolce added one from the distance in the 20th minute. Just 23 seconds later, Francesco Di Fulvio found the net in a counter-attack to give his team an 8:3 lead.

Mallarach scored from an extra player attack a minute and a half from the end of the quarter and Italy entered the last period with an 8:4 lead.

Early in the fourth, Del Luongo hit the back of the net for the second time today. Italy earned a new 5-goal advantage (9:4) and it was clear that the gold belongs to them. Two goals were scored by the end. Mallarach netted for 5:9. Bodegas set the final score 10:5 minute from the end, and the celebration could start!

Three Italians players were members of the team which won the gold eight years ago: Nicolo Figari Pietro Figlioli and Matteo Aicardi. That team was guided by a head coach Alessandro Campagna, who has been Italy’s coach since 2009. He was a head coach of the national team for the first time from 2001 to 2003.

David Martin, Spain head coach, played for the team which won silver in 2009. Members of that squad were also Perrone, Mallarach and goalie Lopez.

Advancing to the final match is the big progress for both teams since the previous Championships, as Italy was 6th, while Spain took the 9th place in Budapest two years ago.

Alessandro Campagna, Italy head coach, was very happy after the match. He congratulated his colleagues who won silver and bronze medal:

-Congratulations to my colleagues from Spain and Croatia — David and Ivica — and all the teams who played fantastic water polo. To beat Spain we had to play a perfect game with fantastic quality water polo tactically and play in a passionate way to win. I am happy. I have seen my team grow up day by day, not focusing on the other teams. We played with more confidence from the first three or four games where we learned the style of the referee and the whistle. I trust the IOC, who came to watch, will be happy and stay stable in the Olympics and bring 13 players back to the Olympic Games.

Pietro Figlioli, Italy captain and the best player of the competition:

-For me, I’ve been looking forward to this since 2011 — the last time I played in it (and won the world title). It was a little easier with the emotions and the pressure this time in front of a very strong adversary. We have met quite a few times in the past. It’s an unbelievable feeling… blissful.

-Congratulations to Italy who was the best team in the water, coming out with big energy and intensity. We were very tired after playing a hard match against Croatia in the semifinals. Italy was very tactical, very defensive. We had problems with the break of three goals going up in the attack. It was very difficult as the final of the European Championships. This is the beginning of the story for Spain. We will play better and work for the future and the Olympic Games. We will come back and repeat.” On both Spanish teams making the gold-medal finals: “It’s very important for the Spanish teams, the clubs, the club coaches and everyone.”
(quotes source: FINA)

For bronze: Croatia earns 7th medal at the World Championships

For 5th and 7th place: Serbia finishes 5th in men’s competition in Gwangju 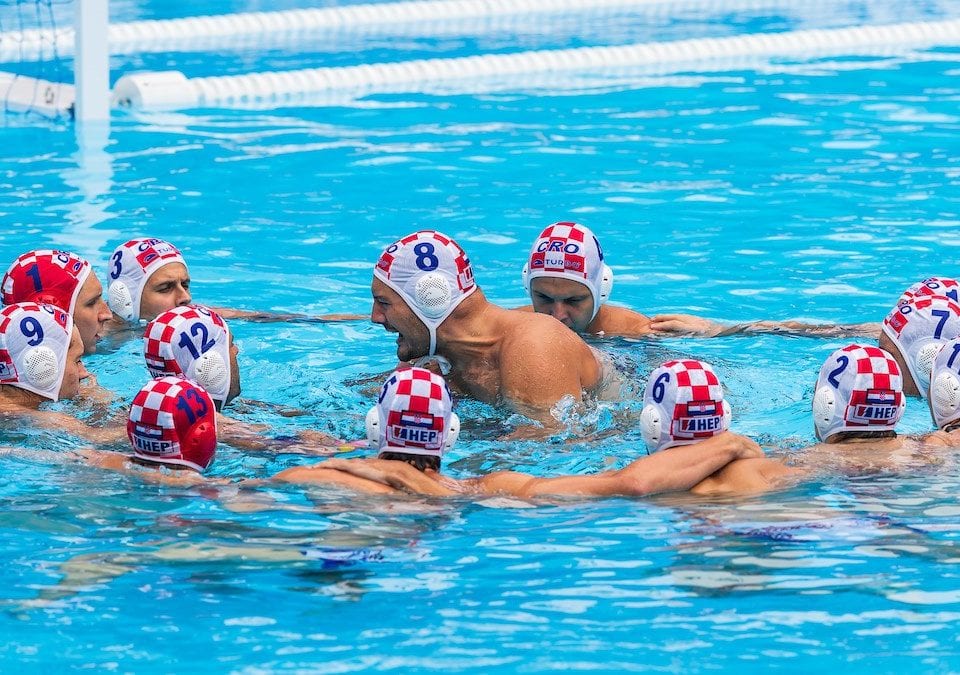