We are only days away from the beginning of the most prestigious water polo competition on the planet as the much-anticipated Tokyo Olympic Games commence on Friday 23rd July. The games, which were postponed from last year due to the COVID-19 Pandemic, are the pinnacle for most sports – and water polo is no exception.

Water polo fans around the world will be excited that the water polo discipline kicks off on Saturday with the women’s event – which makes its sixth appearance in the modern Olympic era.

Whilst the men’s tournament has been a regular feature at the Olympics dating back to Paris in 1900, the women’s competition had to wait 100 years until Sydney 2000 to make its Olympic debut. Given the popularity of the event and its increasing impact on thousands of young athletes across the world, one can only wonder why it was not added as an Olympic event sooner.

Down the years, the women’s competition has seen some thrilling contests that have gripped spectators around the world. A few games that spring to mind are: Australia 7-6 Russia (Semi-Final Sydney, 2000), Australia 4-3 USA (Final, Sydney, 2000), The Netherlands 9-8 USA (Final, Beijing, 2008) and Hungary 13-14 USA (Preliminary match, London, 2012). Hopefully, over the next two weeks, Tokyo 2020 will treat us to more memorable fixtures.

With the event increasing from eight teams in Rio 2016, ten teams will consequently battle it out for Olympic glory at the Tatsumi Water Polo Centre, situated in the Koto district of Tokyo. The ten participating teams will be separated into two groups of five, who will all play each other for classification into the quarter-finals. Finishing bottom in either group will result in the team being automatically eliminated.

Group A sees the reigning European Champions, Spain, alongside European rivals, the Netherlands. Canada, who finished fourth at the recent World League Super Finals are also in the group, which is completed by two southern hemisphere nations – Australia and South Africa.

In Group B, we find the tournament favourites, the USA. However, they are not officially the highest-ranked team – that honour belongs to Hungary who are also in the group. This discrepancy is due to the number of events that nations participate in, to which they receive points. As Hungary won the Olympic Qualifying tournament in Trieste, they won extra points which improve their ranking. The USA did not enter this tournament, as they had already qualified for the games through winning the 2019 World League. The second-seeded team, Russia, are also in Group B, joined by the two Asian teams – China, who won the 2020 Asian Games, and the Olympic hosts, Japan.

Can the USA be stopped?

There is no doubt that the USA are strong favourites to win the gold medal in Tokyo. Their dominant display four weeks ago in Athens which saw them clinch their seventh consecutive World League title will give them confidence that they can achieve what only two teams have ever managed to accomplish in the history of the sport – winning three consecutive Olympic gold medals. Great Britain’s Men’s team managed to win gold at three consecutive games in 1908, 1912 and 1920, whilst most will recall the more recent triumph of the legendary Hungarian team led by Denes Kemeny that won gold in 2000, 2004 and 2008.

It takes a great team to achieve a feat such as winning three back to back Olympic gold medals, and there is no doubt this current USA team is one of the greatest the women’s game has ever seen. With the likes of Total’s Water Polo Player of the year 2020 and double Olympic champion, Maggie Steffens, who is only 10 goals away from becoming the all-time Olympic leading goal scorer, as well as the ever-increasing talent of Maddie Musselman – who may well be the best player in the world at the moment, the USA does not lack class going forward. With the added security between the sticks from the best goalkeeper in the world, Ashleigh Johnson and her backup Amanda Longan, complimented by the defensive qualities provided by Alys Williams and Makenzie Fischer, the balance in Adam Krikorian’s squad is difficult to bet against.

Despite the USA’s extraordinary depth in quality, some of their Olympic rivals may feel they have an outside chance of causing an upset and bagging a medal.

European champions Spain will contend they are best placed to challenge the USA for the Olympic title. The Spaniards, led into an Olympics for the third time by the experienced Miki Oca, will certainly want revenge against the USA for the 8-5 defeat they suffered against the USA in the gold medal match at London 2012 (which remains Spain’s only Olympic medal).

Six of Spain’s squad, as well as Oca, were there for that defeat eleven years ago, which will surely motivate them to push a step further. Pili Pena, Spain’s 35-year-old captain, is the oldest female player in the competition. She will provide her side with some much-needed experience as at the other end of the spectrum, Spain’s 16-year-old Elena Ruiz is the youngest athlete at the tournament. Spain’s primary threat comes from both of their pit players, Maica Garcia Godoy and Paula Leiton, but Anna Espar, Roser Tarrago and Bea Ortiz make up a deadly and effective perimeter.

Hungary, however, may feel they have the best chance of stopping the USA from winning the gold medal after a reasonably close contest in the World League final in Athens last month. Attila Biro’s side certainly can match any team when they are at their best, but they don’t seem to reach their potential anywhere near often enough.

You can bet, however, Hungary’s most consistent performer,  29-year-old captain Rita Kezstheyli, will be determined to secure an Olympic medal at her third time of asking. If Hungary’s ever influential centre-forward, Rebecca Parkes, can play to her normal high standards alongside the talent of Greta Gurissati, Dora Leimeter and Anna Illes, Hungary can be confident in securing a medal.

Russia very much fall into the same category as Hungary in being somewhat inconsistent at major tournaments. Their problem stems from often starting badly before growing into events. Given the standard of their rivals in Group B, their head coach Alexandr Gaidukov will know they can ill-afford a poor start or face a potentially very difficult quarter-final. Russia, who may otherwise be referred to as the Russian Olympic Committee (ROC) for these games, certainly have the squad to challenge any of the teams in Tokyo – evident by their European Championship silver medal in 2020 and their World League bronze medal last month.

They have a very experienced side, many of whom won the bronze medal at Rio in 2016 in a tense penalty shootout against Hungary, such as their two centre backs Evgeniya Ivanova and Anna Timofeeva and their captain and Total’s Player of the year 2018, Ekaterina Prokofyeva. Russia’s biggest problem is that they frequently don’t seem to score enough goals, but if their most likely goalscorer, Nadezhda Glyzina, can find her golden shoulder this tournament, Russia are in with a real chance of a place on the podium

The Netherlands have been somewhat absent in the conversation surrounding the Olympics. The Dutch side secured their tickets to Tokyo in fairly unconvincing circumstances by finishing second in the Olympic qualification tournament in Trieste. Perhaps missing out on a medal at both the 2019 World League and the 2020 European Championships (finishing 4th in both) has given a false perception that Arno Havenga’s side are not medal contenders. The experienced Sabrina van der Sloot, who finished second in Total’s player of the year award 2018,  will lead the line supported by the exciting talent of young Simone van de Kraats and Maud Megens.

If the dutch can summon some of the spirit they showed in 2008, when they shocked the water polo world by winning the gold at Beijing (with thanks in a large part going to seven goals in the final from Danielle de Bruijn), they may find themselves as serious candidates at the business end of the tournament.

Due to the fact Australia is situated in the southern hemisphere, it is not all that often we get to see their national team or squad members play as much of their squad currently play for Australian clubs. The ‘Aussie Stingers’ are very much sleeping giants of the women’s Olympic water polo event and are long overdue an Olympic medal.

After winning the first women’s water polo event at their home Olympics in Sydney in 2000 thanks to that last gasp winner from Yvette Higgins from 9m with 2 seconds to go,  they have recently stagnated at the Olympics by their very high standards –  only managing bronze medals at Beijing and London. But the Australians always find another gear and play with more purpose at the Olympic games, making them a tough opponent for any of the other nations.

Australia are currently third on the all-time Olympic medal standings and will hope that their experienced captain and bronze medalist from London 2012, Rowena Webster, can help bring Olympic triumph back to Australia. Recent history has shown they can compete with all of their Olympic rivals, finishing third at the 2018 World Cup and fourth at the 2019 World Championships.

After a seventeen-year absence from the women’s Olympic water polo event, we are excited to see Canada make their return at Tokyo. They are perhaps the most underrated team at these games, but David Paradelo has steadily assembled a very functional team that just works well as a unit. The core of their team is made up of their left-handed centre forward, Emma Wright, their strong attack-minded centre back, Hayley McKelvey and their utility players on the top of the arc, Shae La Roche and captain Monika Eggens.

Some will say an Olympic medal is a step too far for Canada this time out, however, off the back of two fairly decent results at the past two World League Finals (4th in 2018, 4th in 2020), an Olympic medal is very much achievable for this group of players. 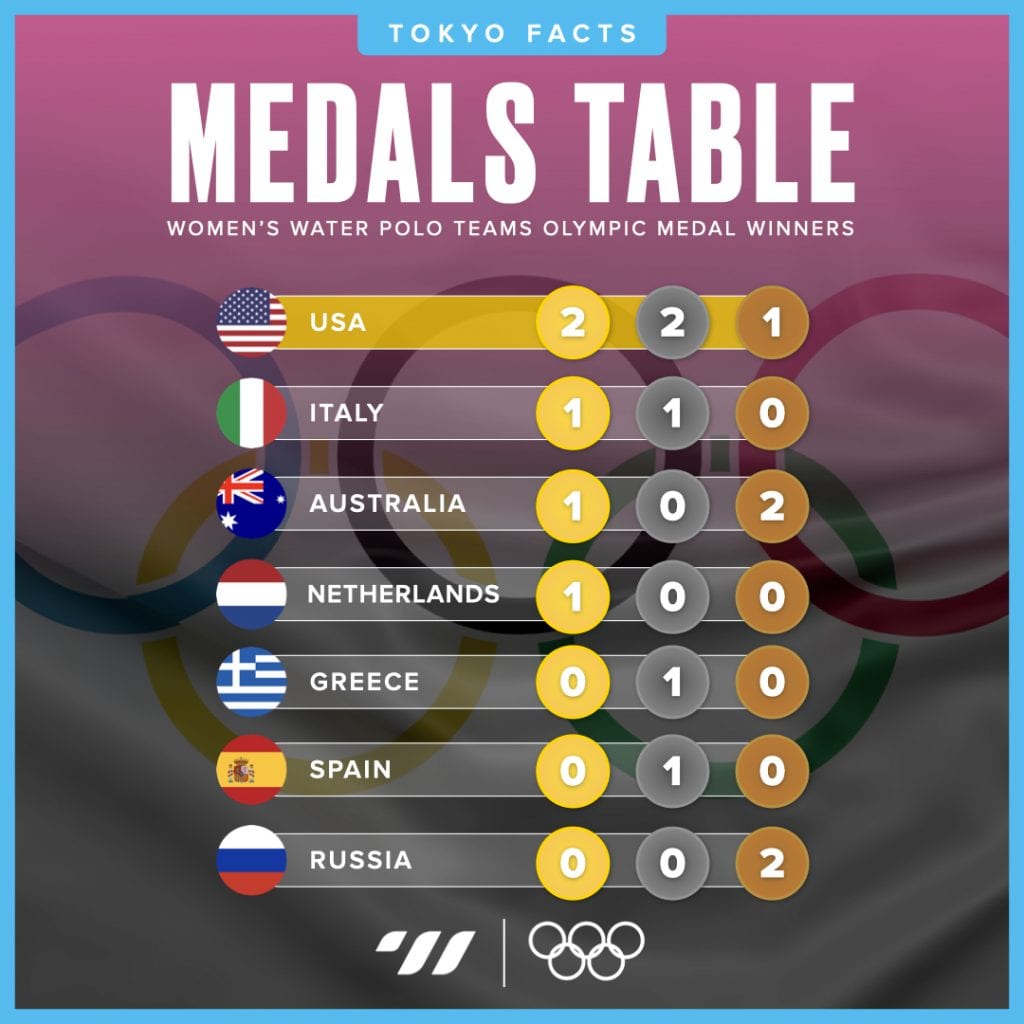