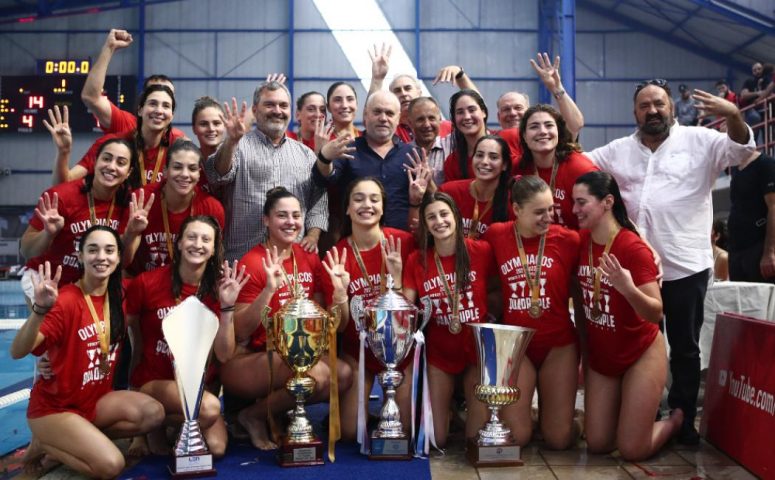 Olympiacos Piraeus have made history in securing a domestic and European quadruple; winning the Greek Women’s National Championships, the Women’s Greek Cup, the LEN Women’s Euro League and the LEN Super Cup.

Aleksandar Ciric may have felt he faced an impossible task ahead of him taking over the reigns of the club from long-time steward of the club, Charis Pavlidis, but in his first season as the head coach of the club, he has led them this season to a level of success and domination like no other.

The ball was set rolling back in December for the Greeks when they saw off Kinef Kirishi by 14-11 in the Super Cup Final. They then retained their Euro League title in early April with a strong display over Sabadell, before adding the Greek Cup to their trophy cabinet a fortnight later.

However, yesterday they secured the jewel in the crown by once again beating Glyfada in the third National Championship Final. Despite Glyfada’s best efforts, the game belonged to the Red and Whites – who took a decent first half lead, and made sure of the silverware in the second half.

Olympiacos have now won the last 9 national championships, with the 2021/2022 being their 13th title.

Perhaps it is no surprise that Olympiacos’ star-studded team have been so successful this season, with a huge amount of investment going into the squad in the past couple of seasons, bringing world class starters into the team such as Kyra Christmas, Eleni Xenaki, Brigitte Sleeking and Jordan Raney, and a lot of quality of squad depth to the club. Even with the busy recruitment, this doesn’t always translate into titles – so full credit is owed to the commitment to win by this group of players.