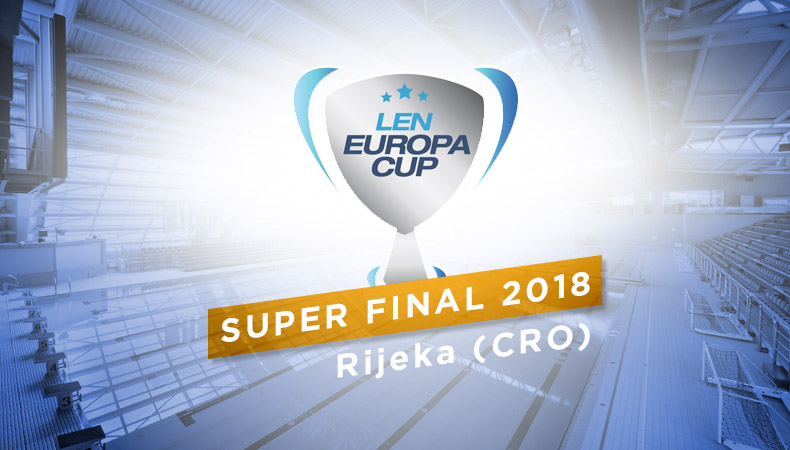 From 5th to 8th of April, Rijeka (CRO) will host the final tournament of the Europa Cup 2018. This exceptionally strong tournament will offer Hungary, Italy, Greece, Spain, Serbia, France, Montenegro and Croatia a chance to win a title and the prize money totaling €40,000.

All the mentioned national teams qualified by playing the prelims held in three European cities, winning an opportunity to play in Rijeka.

The first showdown of the year

Teams competing in the upcoming Super Final of the LEN Europa Cup are the crème de la crème of men’s water polo. The playing format ensures that even the prelims will produce pretty tough matches: with no semi-final round in place, one loss might rule out a team from playing for the trophy and the top prize of €20,000 (runner-up receives €15,000, the bronze medal pays €5,000).

Whenever teams of the former Yugoslavia play each other, it’s always a must-see game – in Group B one of these mouth-watering fights is scheduled for each of the first three days. Thanks to a quite rarely seen scenario, Olympic champion Serbia, world champion Croatia and European silver medalist Montenegro are in the same quartet here at the Adriatic coastline. It’s somewhat bad news for the fourth team of the group — France, though they caused some surprise by making the cut for the Rio Olympics two years ago.

The opening day kicks off right with the rematch of last year’s World Championships astonishing semi-final between Hungary and Greece, followed by a usually hotly contested battle of Italy and Spain. Host Croatia might have a seemingly easier, but still demanding start against France, then comes the heavy-weight bout of Serbia and Montenegro – it’s a replay of the 2016 European Championships gold medal game.

Winners of the round robin phase shall clash for the title on Sunday, runners-up will play in the bronze medal game – so the first three days will already be devoted to fierce battles. Interest from the media is already sky-high, broadcasters line up in numbers usual at European Championships – and LEN also offers free live stream from each and every game of the Super Final.

Although the Europa Cup is a new competition and still lacks the strength of the “big” ones, the final list of competitors looks promising and we will surely enjoy the games.

Check out the tournament schedule here.

You can find the game schedule for Europa Cup finals here. Total Waterpolo will be following all the games, so make sure to follow us on Twitter and Facebook.