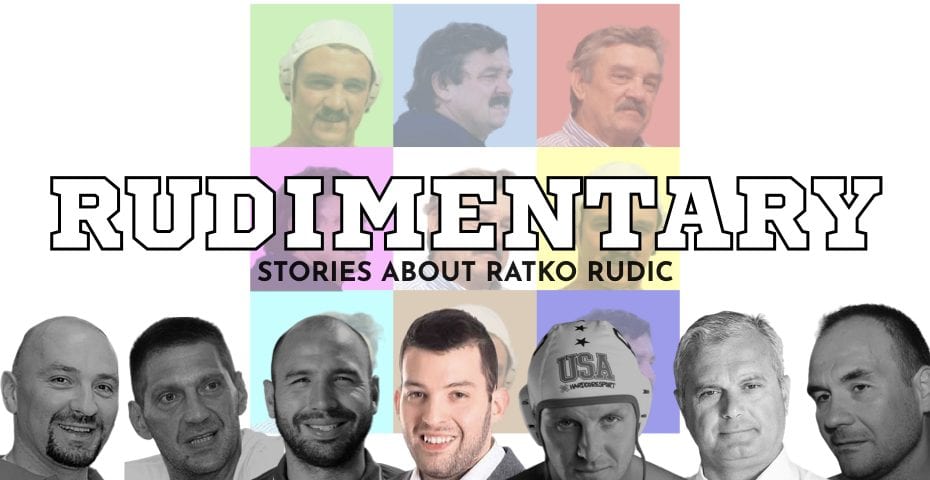 After we hosted stories from Perica Bukic, Igor Milanovic, Alessandro Campagna and Samir Barač in our Rudimentary series, next to go is one of the best players in the last decade.

Filip Filipovic, Serbia’s captain, worked under Rudic’s guidance at the end of the successful coach’s career – during two uncompleted seasons in Pro Recco. The crown of Rudic’s career and Filipovic’s nine seasons in Pro Recco was supposed to be the 2020 Champions League Final Eight in Genoa. But, the coronavirus pandemic ruined the dreams and the plans. Rudic ended his coaching career, Filipovic left Pro Recco at the same time.

“The conversation in Rome wasn’t pleasant, but since it was a conversation in strong emotions, everything is forgiven to the water polo legend like Ratko is. Still, before his arrival in Recco, we haven’t had a long and open talk”.

Great passion and dedication to the job

Filipovic had learned a lot about Rudic before they started to work together. Did you meet new Ratko when he came to Recco?

“A firm work style and the way he leads the team are what adorns Ratko’s coaching work. From start to end. Also, his passion and dedication to his job borders on the impossible. Whatever team he led, he was 100 percent in that job. That’s what nobody told me, but I had the honor and opportunity to feel that”.

“It was hard in the head. It wasn’t so much hard physically as it was mentally. And it wasn’t so hard during the preparation period, but it was later. He did not give up until the last day. But that was a part of his way of working. From the moment I accepted that training system as standard, everything was easier for me.“

„If any of the players stayed after the training session to practice a shot or another segment, Ratko always waited until the last player finished the practice. That is the fact to remember and an example to all the other coaches. By these manners, he showed respect to his players.“

Rudic has a nickname “Tyrant”, because of his demanding discipline. Was he so strict?

“No, he wasn’t! He was just consistent and persistent in his demands and discipline. That was something he would let every player know from day one. He liked the conflict with the “troublemakers”. Because of his many decades of experience, he knew precisely how to integrate these players into his system and in the purpose of the team. He was always a just and fair coach. He hasn’t favored individuals. Perhaps, some had a prejudice that he was strict because of that kind of relationship with players.”

A sentence which raised morale in a second

Filipovic agrees that Rudic was an excellent motivator. He remembers the situation from the previous season. Rudic’s first final game on Recco’s bench was the final of the 2019 Italian Cup. Pro Recco played against Brescia in the final.

“Before the final, we experienced a big injustice in interpreting the rules, and Ratko only wanted to clarify the situation to explain to us how to approach a certain situation. After a bilious debate with the leaders of the federation and the top four Italian clubs, he left the meeting furiously. One of the players asked him anxiously: “Ratko, what did they say, what will happen?” He just took a step back, smiled, and said very confidently: “It will happen that they will do everything to take this Cup from us and that we will win no matter what!”

At that moment, Rudic made everyone smile, but not only that, Filipovic says. He adds that Rudic’s words gave a high self-confidence to all the players:

“I think that it was one of the rare moments in my career when I felt that the coach’s sentence could raise the team’s morale to the maximum in a second. During the team’s meeting before the game, he did not want to talk about tactics, as it is usual. He just asked of us to go into the pool and give our maximum as much as it was possible at that moment. In the final, we humiliated Brescia in a spectacular way…” (the score was 10:3 -Ed).

Talking about the Rudic’s style of preparation for matches and tournaments, Filip says:

“He always wanted to prepare us mentally for stress and the critical moment that each team experiences during the decisive games. He was preparing us for the moments in which the correct reasoning, at pulse 180, decides. These preparations, exercises, and the way he wanted to induce the critical moments were very difficult for us. Sometimes we would think that nothing makes sense…”

What did you learn from Ratko Rudic that will be useful to you throughout your whole career?

“He taught me that a player who is permanently under physical pressure falls mentally after a certain period. And we, the opposing players, determine when that fall will come, by our intensity and our will to impose the crucial moment”.

Asked if there was some a part of the game he improved during the work with Rudic, Filipovic gives an answer based on the previous one:

“A tactic of pressing and playing in front of the player! These are two things that came to me as innate after only a few months. The self-confidence that you are attacking directly to an opponent player’s psyche, placing yourself in front of the attacker, and giving space in front of him – is the thing I improved a lot. Ratko Rudic was determining the mental structure of each water polo player unmistakably.”, Filipovic concluded.