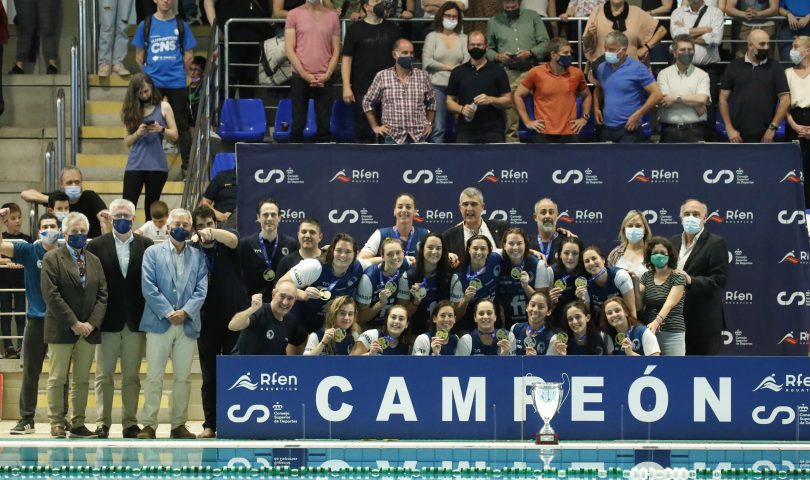 Sabadell are once again the Champions of Spain after beating CN Mataro in an incredible final deciding game 10-7 – winning the overall series 2-1.

After a seriously competitive season, with really close play-off matches, Sabadell retained their title – but they had to work incredibly hard to beat a very strong Mataro side, who have pushed Sabadell all the way this season.

The final today, in which Sabadell came out on top, was part of a best of three series. Sabadell won the first game narrowly while it took penalties for Mataro to come out on top yesterday in the second Play-Off match. It is fair to say Sabadell deserve the title, but this has probably been the hardest season for them in years.

Maica Garcia Godoy, whose pool time was limited throughout the play-offs due to a back injury, was on hand to lift the title for Sabadell. Garcia herself has now won 15 Division de Honors, alongside Matilde Ortiz, who has the same amount.

Irene Gonzalez, who is the best form of her life, netted 4 in the match. Simone Van de Kraats was typically lethal for Mataro, bagging three goals for her side, but she would definitely much rather a gold medal.

In front of a enormously passionate and vocal crowd at Finetworks Swimming Pool, the Spanish Division de Honor title returns to the Vallesanas for a staggering 19th time, as David Palma’s side did what they do best today – win.

Irene Gonzalez saved her best water polo this season for the Play-Offs, adding four goals today to the five she bagged yesterday. Alongside Nona Perez, who converted twice, they were the standout players outfield, but it must be said that Laura Ester had one of her finest ever matches in-between the sticks for Saba.

Mataro were once again guilty of a very slow start, giving Sabadell a clear initiative – Van der Sloot scored from a 5m penalty after a cagey first 4 minutes, before Irene Gonzalez made the man-up goal so easy, before Maggie Steffens made it 3-0 with one attack left in the first.

And while Mataro inevitably got going, they never got closer than 2 goals to Sabadell, demonstrating how important the first quarter was and how important a quick start is. While Mataro pulled off a superb comeback yesterday, there was no such miracle today.

And it got worst before it got better for Mataro. Irene Gonzalez and Nona Perez scored following a Bella Markoch effort that beat Ester, putting the score at 5-1 four minutes into the second.

Silvia Morell and Clara Cambray gave Mataro a little bit of momentum at the end of Q2 with back to back scores, but a somewhat fortunate goal right on the buzzer from Nona Perez, who is developing into such a mature and reliable player for Sabadell, was a lethal setback for Mataro – who still found themselves three goals behind (6-3).

Into the third, you sensed the tension between the two sides. Mataro needed to force the issue, but found it hard to beat the Sabadell defence – spearheaded by the in-form Laura Ester.

If Mataro could have converted early in the third, the complexion of the game could have been different, but as it transpired, it was Sabadell who finally broke the Q3 deadlock; firstly Irene Gonzalez for her hat-trick, before the inevitable say that the League’s top goal scorer, Judith Forca Ariza, would have.

At 8-3, the game honestly looked settled. Mataro hadn’t really got going in the match, and couldn’t find a way to score with any conviction, missing a few crucial man-ups. When the next goal did come for Mataro, it was via a Simone Van de Kraats penalty with ninety seconds in the quarter to play.

Mataro needed something spectacular to overturn the four goal deficit in the last, and Simone Van de Kraats was once again on hand to convert a 5m penalty given away by Irene Gonzalez – practically her only mistake in an otherwise flawless performance.

And Gonzalez even made up for the penalty when she once again converted on a Sabadell set move, to make it 9-5.

Annie Espar, who was quiet for much of the game, netted in the last, but ultimately Sabrina Van der Sloot had the last say in the match – converting well from the extra-player situation. Her Dutch team mate picked her spot from distance for a consolation, but it was not relevant to the result.