Transfer market is heating up: Many big stars are available, many clubs are very active 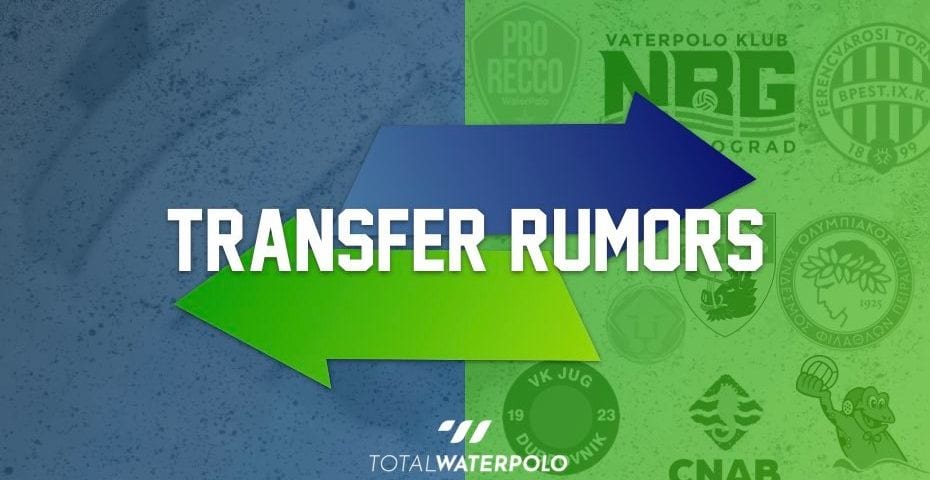 As the end of the season is approaching, there are more and more rumors about the transfer market.

So far, a few transfers and the renewals of contracts have been confirmed by clubs or players.

This article summarizes the completed transfers and most interesting rumors that have appeared in the last few weeks.

Rumors link many players with Novi Beograd, including Pro Recco’s Dusan Mandic (who said that he would think over about the next season after the end of the current one with Recco), Nikola Jaksic (Ferencvaros), brothers Strahinja (Radnicki) and Viktor Rasovic (Noisy-le-Sec), Djordje Vucinic (Sabac), etc.

But, Novi Beograd doesn’t want to reveal further plans before the season is ended. It’s true that the club has a long-term project, and it intends to sign three-year and four-year contracts with its players, unlike many other European water polo clubs.

Most clubs (even the richest) have signed one-year or two-year contracts with their players in the last few years. Because of that, there will be many available players whose contracts will expire at the end of the season. So, the transfer market will be very interesting, for sure. Consequently, the number of news and rumors about possible transfers has been increasing day after day.

As usual, Pro Recco is in the media spotlight during and before each transfer window. Aleksandar Ivovic won’t leave Recco. He was contacted by Novi Beograd, but Recco offered him a new 2-year contract (until 2023). The Montenegrin accepted the offer. It’s sure that center-forward Niksa Dobud and Pro Recco part ways. Dobud will join Jadran Split. As things stand now, Dobud’s fellow countryman, goalkeeper Marko Bijac also won’t extend the contract with the Italian giant. Greek media report that Olympiacos negotiates with Bijac. It’s likely that Marco Del Lungo, the first goalkeeper of the Italian national team, will leave Brescia, after ten years at the club, and he is Recco’s first pick for Bijac’s successor.

Brescia left without Vlachopoulos, Del Lungo will also probably leave the club, as well as Giacomo Canella (he is contacted by Pro Recco, too) Croatia’s left-handed goal-getter Maro Jokovic could also leave Brescia, after one season spent at the club. Jokovic is considering a return to Croatia, because of family reasons, but it also is possible that he will join Olympiacos. He played for the Greek champion before moving to Brescia. But, Brescia had already finished some of the jobs in the transfer market – Vincenzo Renzuto Iodice, Jacopo Alesiani, and Edoardo di Somma have renewed the contracts.

If all rumors came true, several players will leave Ferencvaros besides above mentioned Varga, Zalanki and Jaksic. Greek Ioannis Fountoulis, allegedly, might return to Olympiacos, while Vasas aims to bring Tamas Sedlmayer and center Tamas Mezei. Canada’s center-forward Nicolas Constantin-Bicari could move to Italy. Some sources say that the Italian Swimming Federation is considering offering him Italian citizenship and to play for “Settebello “. According to sources from Hungary, Ferecvaros is in talks with two center-forwards Nemanja Ubovic (Sabadell) and Konstantinos Mourikis (Olympiacos), while Russian Daniil Merkulov, who plays for Jug, is very close to moving to Ferencvaros.

Vasas, which has been supported by a new sponsor since last summer, hasn’t played in the European cups this season, but the club is ambitious. Therefore, it is expected that a few good players will be joining Vasas.

Olympiacos cut its budget last summer, but it seems that the Piraeus-based club will be very active in the transfer market this year, although it failed to bring back Angelos Vlachopoulos. Besides Bijac and Jokovic , the captain of Croatia Andro Buslje is, reportedly, among Olympiacos’ potential reinforcements. He moved from Pro Recco to Mladost last summer. Buslje won the 2018 Champions League with Olympiacos.

Filip Filipovic, the biggest star of the 2020 transfer market (he left Pro Recco and joined Szolnok), is also one of the players, who are targeted by Olympiacos. There are rumors that link his name with  Olympiacos, Vasas, Barceloneta, and Brescia. But, which club wouldn’t like to sign a contract with a player like Filipovic is? The real question is: Which club is capable of bringing Filipovic?

A new young club – Novi Beograd – is very active in Serbia, while some things are changing in Croatia, too. Jug and Mladost, the best two Croatian clubs in the past years, will have a new strong opponent in the next season. By signing Niksa Dobud, former European champion Jadran Split sent a strong signal that it wants to compose a very good team, which will enter the battle for trophies. Excellent goal-getters Luka Bukic and Konstantin Kharkov (both Mladost) are close to signing contracts with Jadran. Sandro Sukno, who guides Primorac Kotor this season, had been touted as one of the leading candidates to become Jadran’s new coach.

Last summer, Mladost managed to keep most of the players and to renew the contracts with them, but it seems that the Zagreb-based side will face the departures of many players. Besides several that we already mentioned, one of them is Josip Vrlic, who could arrive at Radnicki Kragujevac, the club he played for several years ago.

Radnicki tries to keep most of the players who won the Regional League, but some reinforcements are in the club’s plans.

The news and rumors are coming from Spain, too. According to the latest pieces of information, a 41-year-old goalkeeper of Barceloneta Dani Lopez is considering retirement after the Tokyo Olympics, and Barceloneta already contacted the second goalkeeper of the Spanish national team Unai Aguirre (Barcelona), who could replace Lopez.