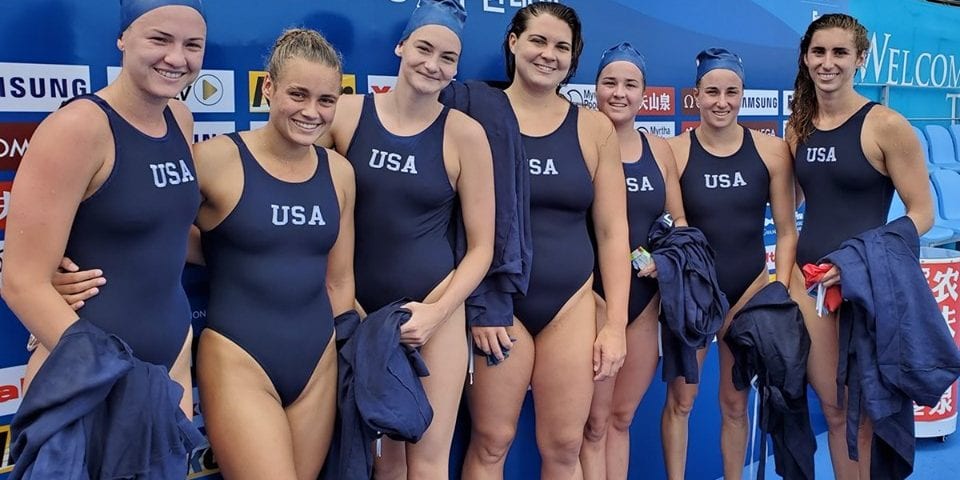 The USA women’s team became the first world champion in the beach water polo. The first WCH in this new sport is an exhibition event during the Championships in classic water polo in Gwangju. The Americans didn’t get gold medals, because the tournament wasn’t a part of the official competitions at the FINA World Championships, but they were awarded by diplomas.

The women’s tournament was completed today, while the last two matches of the men’s competition will be held tomorrow (France and Argentina will face off in the match for the first place). Four women’s and four male teams have taken part in the competition.

In today’s final for ladies, the USA narrowly defeated Spain (14:12) and finished the competition with a perfect record – 4 wins in 4 games. The bronze medal was won by Australia, which beat China in the match for the third place (20:16).

Games have not been playing by the beach (in a sea, a river, or a lake), but into the pool. The venue is a pool in Nambu University Center, the same one for the tournament in classic water polo.

Our website already published an article about the beach water polo tournament in Gwangju , but let’s see once more, the most important details of this new sport: the field of play is 15m x 10m. There are two halves of 10 minutes of action time. Each team consists of four players (goalkeeper + 3 field players) and not more than three reserves. The ball size is the same as for regular water polo.

Players are mostly delighted with the new sport, which is faster than classic water polo. The high number of goals proves that. A lot of players, coaches and FINA’s representatives told that beach water polo had great potential.

“It was s a pleasure to play in this competition. It’s a very different game (than regular water polo) because it’s faster, but I like it.”, said Helena Dalwases, a member of Spanish female team.

Second half of the final game

The final (France – Argentina) and the match for the 3rd place (China – Canada) will be played tomorrow.