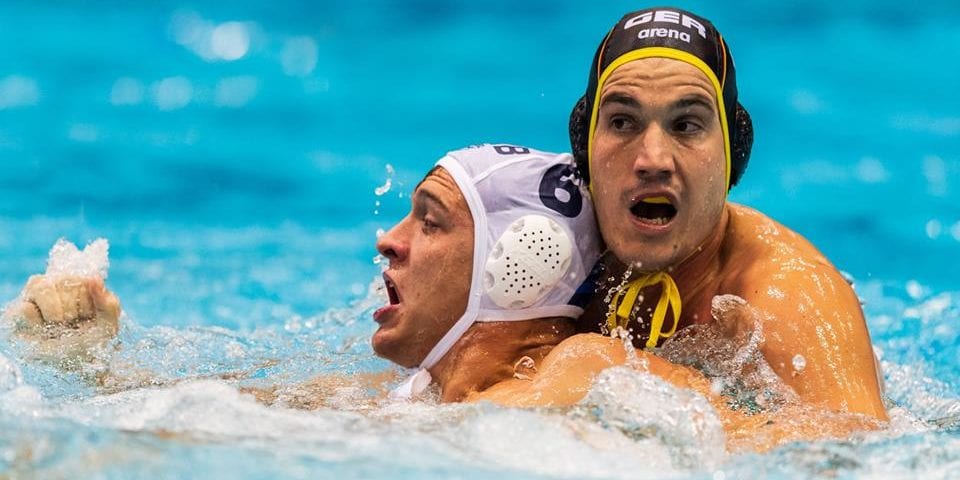 Serbia and Australia will face off in the match for the 5th place of the World Championship men’s water polo tournament in Gwangju. The two teams defeated their respective rivals in the very thrilling classification 5-8 semifinals.

Serbia edged out Germany after a penalty shootout (17:16). Australia defeated Greece by a goal (9:8) .

The match for the 5th place will be the 3rd encounter between Serbia and Australia this season. Serbia celebrated the wins in both previous games which were played at the World League Super Final in Belgrade (in the Group Stage and in the semifinals).

The USA team clinched the 9th place with a narrow 15:14 win over Montenegro. Japan blew away South Africa in the match for the 11th place (15:5).

Serbia, the Olympic and the European champion, passed through some scary moments before it defeated Germany, which has made good progress in the last few years. Favorites (Italy, Croatia, Serbia) had a lot of problems with Germans in Gwangju.

The Germans were more motivated, as the Serbs are used to play medal matches, while the Germans’ highest ranks at the World Championships since the bronze medal in 1982 were the 5th place (1991) and two 6th places (1986 and 2009). But, a young Serbian team also have motives to show its potential for the future.

There were a few twists in the first half, but the gap between two sides was never larger than a goal. Before the third period, it was 6:6. After 50 seconds of play in the third quarter, Serbia went in front (7:6). The Germans soon produced a 3:0 run to earn a 9:7 lead. The Olympic champions came close (8:9), but in German’s next possession Serbia lost a captain Milos Cuk, because of his 3rd personal foul.

The Germans were keeping a 2-goal advantage in the fourth period (10:8, 11:9, 12:10), by goals scored by three reinforcements from other countries: a Dutch-born Lucas Gielen, Mateo Cuk, who was born in Croatia (he is not Serbia captain Milos Cuk’s cousin), and a Serbian-born Marin Restovic. 63 seconds from the end, the Germans had a 2-goal advantage (12:10). Than came Dusan Mandic’s beautiful backhander for 11:12 (it was his 5th goal in the match), while Djordje Lazic finished Serbia’s well-prepared attack to equalize from a center shot and to secure a penalty shootout (12:12) thirteen seconds before the last buzzer.

The penalty shootout was decided in the first series. Serbia’s goalkeeper Dimitrije Risticevic blocked Gielen’s shot (the two players were the team-mates in Partizan Belgrade for a few years). Next 9 penalties were converted to goals and Serbia secured the playoffs for the 5th place.

Greece opened the match with a 1:0 lead, but the “Aussie Sharks” earned a 4:2 lead early in the second period. In the middle of the quarter, they had a 5:3 advantage. After that, the Greeks tightened their defense, while they scored four goals in a row and turned around the 2-goal deficit to a 7:5 lead (19th minute). Australia leveled the score 7:7. Greece went in front once more (8:7, two minutes and 16 seconds from the last break), but before the final eight minutes, the teams were tied at 8:8.

The last quarter started with three and a half minutes of the battling with misses, saves, blocked shots and turnover fouls at both ends of the field. In the middle of the quarter, Richard Cambell found the net for 9:8. In the last 4:29 minutes, the big battle continued, but there were no goals. Greece had the last attack, but Ioannis Fountoulis made a turnover foul 12 seconds from the end, and Australia kept the ball in the remaining time.

For the 9th place

The USA team was leading throughout the 1st half. The Americans had a 3-goal advantage early in the second period (6:3), but at halftime, the rivals were tied, as Uros Cuckovic beat the buzzer to level the score, just 1 second before the break – 8:8.

After the third period, it stood 12:12, while Radovic put Montenegro in front early in the fourth (13:12). The Americans responded with two goals for a 14:13 advantage in the 29th minute. Ivovic scored his 21st goal in the tournament to equalize (14:14) with 1:44 remaining on the clock. Hannes Daube netted a winner 36 seconds before the end.

South Africa converted a penalty for an early 1:0 lead, but after that Japan dominated and, as expected, easily defeated the Africans to clinch the 11th place.