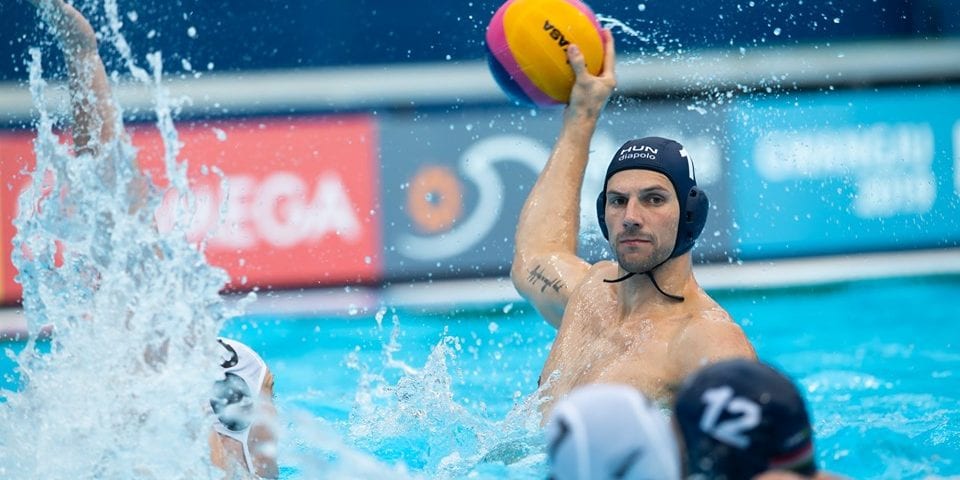 The third quarterfinal match of the men’s tournament at the World Championships in Gwangju offered a thrilling finish. Hungary defeated Australia 10:9, by a goal which was scored 4 seconds from the end.

Another important and good news for Hungary’s fans is that a captain Denes Varga came back after he had missed three matches because of injury.

There were no excitements in the previous encounter between these two teams. Hungary trashed Australia 10:4 in the 2018 FINA World Cup final.

Hungary was leading 1:0 and 2:1, while Australia went in front in the 7th minute (3:2). The rivals were tied after the first quarter. Early in the second, Szilard hit the back of the net for Hungary’s new advantage (4:3). Australia responded with a 3:0 series and earned a 6:4 lead (13th minute)

Then, Hungary’s coach Tamas Marcz decided to send Denes Varga into the water, despite the captain hasn’t fully recovered from an injury (a broken finger on the right hand), that he suffered on Day 1 of the competition. That was a good move. Boosted by Varga’s return, the Hungarians played better and equalized early in the third period (6:6).

In the middle of the 3rd quarter, “Aussie Sharks” earned a new lead by a goal from Joseph Kayes. Just 18 seconds later, Varga brought on equal terms – 7:7, as he found the net in his first and only attempt to shot on goal in this match.

Hungary took control and went 9:7 up in the 28th minute. Australia was able to come back. Kayes equalized to 9:9 (1:13 remaining on the clock). The “Aussies” had a great chance to secure a win for his team, but Viktor Nagy blocked Kayes’s shot 7 seconds from the end (the Australians signalized that Kayes was fouled by a Hungarian player, but the referees didn’t think so). It seemed that a penalty shootout would decide a winner.

After that action, Hungary called time out to prepare for the last action. Just 4 seconds before the final buzzer, Marton Vamos scored a winner from a direct shoot in a free throw situation – 10:9. In the last second Nagy blocked Younger’s shot from the middle of the field.

Marton Vamos and Gergo Zalnaki (3 goals each) were the top scorers.

Hungary, the silver medalist in Budapest 2017, will have a chance to win a new medal, while Australia has to wait at least two years to reach the semifinals at the World Championships again. They have qualified for the semifinals just once so far (4th place in Perth 1998).

Morning sesion USA and Montenegro to play for the 9th place