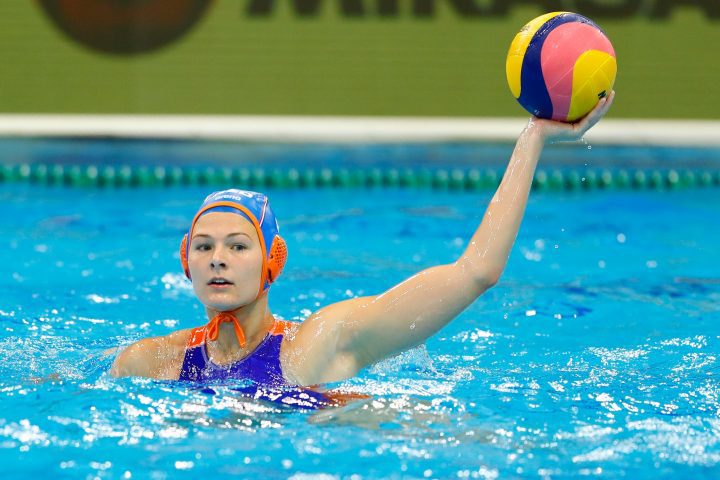 As the club season in Europe draws to a close, the first of many major international events this year will commence this weekend in Santa Cruz de Tenerife with the Women’s World League European Finals.

Taking place at the Acidalio Lorenzo Municipal Swimming Pool this weekend (22nd-24th April), five European nations are looking to join Australia, Brazil, Canada and the United States, who all qualified via the Intercontinental Cup in Lima earlier this year, to the much coveted Super Finals tournament.

The six European teams heading to Tenerife firstly includes the hosts and current reigning European Champions, Spain. Travelling west to face them are the 2020 World League Runners-up Hungary, as well as the only European side left in the competition to have won the World League back in 2005, Greece.

The Netherlands, who are bronze medallists from 2015 in Shanghai, will obviously be very competitive, as will the 4-time World League Runners-up, Italy – who finished top of Group B.

Russia, who incidentally won the World League the last time it was held in Santa Cruz in 2008, are still prohibited from competing as a result of the ongoing invasion of Ukraine, and so France are called in as the understudies hoping to make a big impact on the international stage.

Notwithstanding the absence of Russia and the inclusion of the slightly weaker France, spectators should be really excited about the five other really evenly matched sides heading to the largest of the Canary Islands. The weekend will see Europe’s and the world’s finest players go head to head in what should be a water polo exhibition of the highest quality.

As the winners of their two respective groups, Hungary and Italy automatically qualify for the Semi-Finals, while Netherlands, Greece, Spain and France will look to join them by playing a Play-off match against each other on Friday.

It must be agreed that the top half of the draw certainly looks a tougher assignment than the bottom. The winner of the challenging contest between Spain and Greece, whoever that may be, will then need to face Hungary in order to reach the Finals. On the other hand, the Netherlands will likely beat France in the bottom half of the bracket, before they take on Italy in the Semi’s in what promises to be a fascinating spectacle.

Beginning with the first of the two teams who have already booked a place in the Semi-finals, Hungary will be taking a gifted but also a very determined side to Tenerife including four of UVSE’s title winning side; Alda Magyari retains her place between the sticks, while Panni Szegedi and Kamilla Farago are again rewarded for their outstanding performances this season. In the absence of Rebecca Parkes, who has ongoing obligations with Ethnikos in the Greek League, Natasa Rybanska will put her pit play to good use for her country.

Another key omission from the Hungarian team is Rita Keszthelyi-Nagy, meaning other experienced players such as Krisztina Garda, Vanda Valyi, Dora Leimeter, Dorottya Szilagyi and Greta Gurisatti will all need to step-up and lead in an otherwise young team. 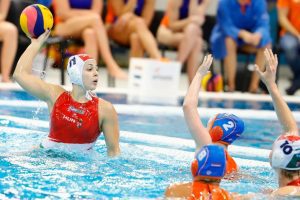 Dalma Domsodi of Ferencvaros played particularly well against Greece and the Netherlands in the earlier rounds of this competition, and returns to the national team. Farkas, Mate, Mahieu, and Horvath all make the cut, while Alexandra Kiss, the second choice keeper, is Eger’s sole representative on the roster

Anna Illes, Gabriella Szucs, Aniko Gyongyossy, Neszmely Boglarka, Panna Pocze, Szonja Kuna and Kinga Peresztegi-Nagy all miss out on Attila Biro’s squad this time – which speaks to the quality available at his expense.

With the World Championships in front of a home crowd just around the corner, this tournament is a big opportunity for some of the players in the squad to really cement their place in Biro’s plans.

Hungary played well in their previous two games, and while they lost a tough assignment in Greece on penalties, they were very easily better than the Dutch to win that game.

One of the more fascinating aspects of this weekend is to see how well Italy will fare as they are back rubbing shoulders with the best international teams in a major tournament.  Italy will almost certainly benefit from entering this tournament at the Semi-final stages as a team that is typically shrewd and astute in the big games. 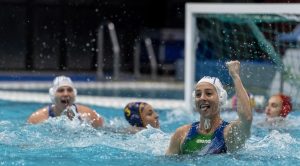 Carlo Silipo is still enjoying his honeymoon period at the reigns of the national team and has selected a very competitive squad to travel to Santa Cruz – many of whom are still benefitting from the intense training of the ongoing season in Italy.

However, there is no denying Italy are missing a lot of players that would be expected to feature in their squad  including: Elisa Queirolo, Vittoria Sbruzzi, Lucrezia Cergol, Aurora Condorelli, Anna Repetto and Sara Cordovani,

Laura Teani remains a regular in goal for her club, Plebiscito Padova, as well as her country, while the Italian League’s top scorer, Silvia Avegno also features.

Aside from Teani in goal, this Italian side does not include any other members of the Plebiscito Padova team who won the Bronze Medal at the Women’s Euro League competition a few weeks ago and the reason for this is not clear. There is always more than meets the eye, but you would expect if those Italian players were good enough to challenge at a good level in European Club competition, they are probably good enough to challenge in European international competitions.

The hosts Spain look very relaxed ahead of their big clash with Greece on Friday – with the squad yesterday spotted taking the time to visit the Museum of Nature in the city centre.

Miki Oca obviously has a large talent pool to choose from, evident from the game against Italy in which he handed 5 national team debuts out to younger players.

Annie Espar, Bea Ortiz, Laura Ester, Judith Forca, Irene Gonzalez, Paula Leiton and Pili Pena all feature in the squad. The young Elena Ruiz will once again be joined in the national team with her sister, Ariadne – who is coming off the back of a really decent season with Sant Andreu. 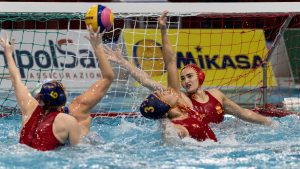 Paula Camus is rewarded for her excellent season in Terrassa, while there are also call-ups for Silvia Morell (Mataro), Alba Munoz (CE Mediterrani) and Martina Terre (Sant Andreu) – who is preferred as Laura Ester’s replacement keeper over CN Rubi’s, Elia Jimenez.

It is too soon for Nona Perez of Sabadell to feature in the eyes of Spanish Head Coach Miki Oca – who also has left Maica Garcia out of the team over injury concerns involving her back.

Spain did lose what turned out to be their only World League fixture so far this season against Italy in Florence. However, after a vigorous climax to the season in Spain and the return of many of their more established players, this Spanish side will likely be the team to beat this weekend.

Riding a wave of huge optimism after the European successes of their two Piraeus clubs, Greece will feel they are ready to cause headaches once again for Europe’s best teams.

Alexia Kammenou has assembled a really well-crafted national team that includes nine of Olympiacos’ s Euro League champions; Eleftheria, Vasiliki and Margarita Plevritou remain pivotal to their club and national team while Nikoleta Eleftheriadou, Eleni Xenaki, Christina Siouti and Maria Myriokefalitaki are amongst the best in form players on the continent at the moment.

Eleni Elliniadi and Karolina Ioannou are Ethnikos’s representatives, and have both played  well for club and country so far this campaign. NC Vouliagmeni’s number three, Ioanna Chydirioti, also makes the cut. 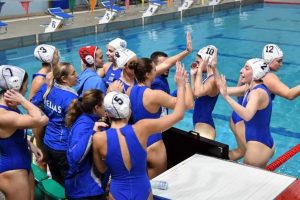 Ioanna Stamatopoulou retains the goalkeeper position and is joined by ANO Glyfada’s Evangelia Karytsa – a pairing preferred over the inclusion of Eleni Sotireli of Ethnikos or Marina Kotsioni of Vouliagmeni.

Foteini Tricha (Olympiacos), Stamatina Kontogianni (Glyfada), Stefania Santa (NC Vouliagmeni), Alkistis Benekou (Ethnikos) are all left out the side, despite having trained with the team in their preparations earlier this week.

The Semi-final against Spain will be a really fascinating encounter for Greece. However the Blue and Whites will hope they can up their performance level from the last time out – where they were outplayed by the Netherlands in the kind of game they should be winning if they are wanting to return to international water polo’s top table.

Another of Europe’s most absorbing and intriguing projects is that being conducted by the newly appointed Evangelos Doudesis with his Dutch national team. With several of their squad playing across Europe’s top leagues, their squad is peppered with real quality.

Several of the squad have made Spain their home in the last season. Sabrina Van der Sloot leads the side again, while Simone Van de Kraats and Vivian Sevenich have had great seasons in Mataro despite a disappointing loss in the Championship Play-off. Iris Wolves, Nina Ten Broek, Marit van der Weijden all also feature in the squad.

Further afield, Brigitte Sleeking is now a European champion with Olympiacos, while Ilse Koolhaas has impressed many with her season in Greece playing for Glyfada. 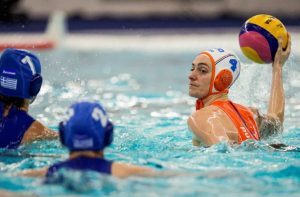 The Dutch league, however, still carries weight in the national team. Fleurien Bosveld and Lola Moolhuijzen (who scored a brace on her debut against Greece earlier this year) both helped the Ede Polar Bears win their 8th national title this season while Bente Rogge, Maxine Schaap (ZV De Zaan) and Janieke Oosting (ZVL-1886) have shown their value in their domestic league.

Laura Aarts of UZSC predictably stays in goal for the Dutch, with her back up being Sarah Buis – who returns with the benefit of experiencing Hungarian water polo in Dunaujvaros this season.

Maartje Keuning is still unavailable, and joins  Maud Koopman and Britt Van der Dobbelsteen in being players that are left out of the squad this time.

The Dutch took time to get going when they faced Hungary in the world league earlier this week, but were much better in front of a home crowd when they beat Greece. The Dutch should beat France in the Semi, where they will then back themselves against Italy. If they turn up from the start in both contests, they should be looking at a relatively straight-forward route to the final.

Les Bleus are the team who benefit from Russia’s expulsion from FINA tournaments and they will take the Russian’s place in Group as third seeds.

We do not know exactly how competitive they will be this weekend, but we did see France qualify for the European Championships in Malta earlier this year. They qualified second in Group C, behind Israel in first.

There is no doubt they have a lot of talented players, many of whom are still young, developing players. Ema Vernoux (Olympic Nice) is a a star player for the French, and is still only 18. The French captain Louise Guillet is also amongst their better and more experienced players.

In fairness to the French, if they had to choose one of the 5 other teams to play in the first match, they would probably have chosen the Dutch, so the game may be closer than many may foresee.

*France have replaced Russia, and will be seeded third in Group B