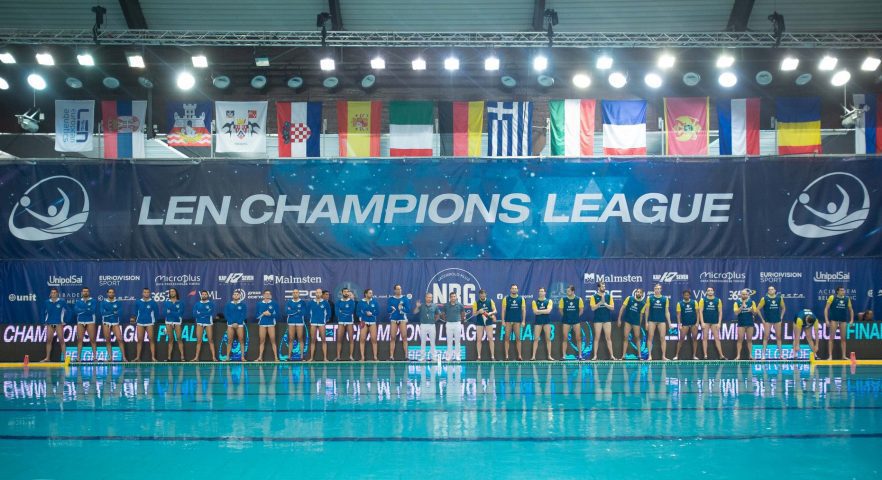 The countdown is over. The 60th edition of the Champions League begins tomorrow.

Many say that the upcoming season will be the best Champions League ever.

Compared to the previous season, two teams are new in the circle of the 16 clubs that will battle for the crown. Sabadell, the LEN Euro Cup winner, got a wild card (after Steaua returned it). Vouliagmeni arrived at the CHL from the qualifications and “replaced” Crvena Zvezda, one of the qualifiers in the 2022 season. The other three qualifiers are Jadran Split, Brescia and OSC Budapest, as in the last season.

Pro Recco will try to win its third title in a row. The Italians are among the big favorites, but several other clubs can reach the throne. Almost every club has many water polo stars and multiple medal winners on the roster. That is just one of several reasons that promise a high-quality water polo.

As in the previous two seasons, the road to the title will end in Belgrade. The Final Eight is scheduled for May 31 – June 3 in the Sports Centre “11 April”. For the first time, the final tournament will be held in four days. The quarterfinals and the semifinals will be played in the first two days. The matches for the 5th-8th places classification are on June 2. The medal matches are scheduled for June 3.

As for the first round, none of the matches is canceled, suspended, or postponed. Last week, Spandau canceled the match against Novi Beograd, but that match will be held (more in the preview of Group B)

Pro Recco (2022: winner)- the roster and more facts about the club: Hunt for 11th crown

Olympiacos (2022:group stage) – the roster and more facts about the club: Season for make up exam

Radnicki (2022: group stage) –  the roster and more facts about the club:Six years of moving forward

Jadran Split (2022: group stage) – the roster and more facts about the club:Promising start to season

Vouliagmeni (2022: qualifications) – the roster and more facts about the club:Comeback after ten years

Three teams are the favorites for the top three places in this group. Of course, it isn’t necessary to mention that Pro Recco is consistently among the title contenders. Olympiacos and Barceloneta have high goals.

Pro Recco starts its hunt for the 11th crown of the European champion. Olympiacos desperately needs a good result after a disappointing last season. Since 2013, Barceloneta, the team with many reigning world champions (the players of the Spanish national team) has failed to qualify for the semifinals just three times (2016, 2017, 2022).

The season will start with a super derby, with a clash of two giants. Olympiacos will host Pro Recco in Piraeus. The two teams didn’t play each other in the season 2021/22. Pro Recco beat Olympiacos in both games in the group stage two seasons ago. However, the Greeks were better in the last two encounters at the Final Eight (in the 2018 final in Recco’s field in Genova and the 2019 semifinals).

But, since the last encounter between Pro Recco and Olympiacos, both teams have changed, especially Olympiacos. Three aces who played for Pro Recco and were the team’s pillars in the previous years – goal-getter Filip Filipovic, goalkeeper Marko Bijac and defender Andro Buslje are some of Olympiacos’ leaders now. Bijac contributed significantly to Recco’s triumph in the Champions League two years ago. Filipovic won three CHL trophies with the Italian club. 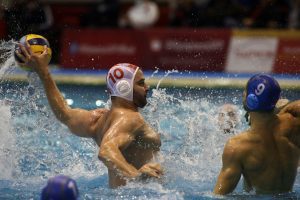 Since Olympiacos’ last defeat to Recco, the Greeks have changed its roster significantly. Besides the mentioned three (who all joined Olympiacos in 2021), Ioannis Fountoulis, Alexandros Papanastasiou, Marton Vamos and many others arrived at Olympiacos. Recco is, at least, at the same level as in the previous and the last two seasons (when it won its 9th and 10th Champions League). Nothing but a spectacular duel is expected of the clash between Olympiacos and Pro Recco. The match isn’t crucial since this is the start of the season, but it will probably be important in a race for 1st place in the group.

Olympiacos has played excellently in domestic competitions since the beginning of the season. Still, the Greeks haven’t had very demanding tasks in official matches, and tomorrow’s derby will be the first big test of Olympiacos’ qualities. Last week, the  Greek champion played friendly games against the Greek national team, which was very helpful in preparations, for sure.

On the other side, Recco showed its strength on Saturday when it beat Brescia in the Italian derby, thanks to an excellent defense (7:4). 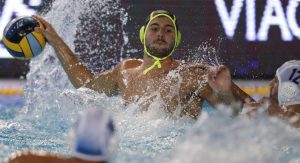 Tomorrow’s match will be a replay of the coaching duel in last season’s final in Belgrade. In June, Pro Recco, coached by Sandro Sukno, defeated Novi Beograd in the final, after a penalty shootout. Igor Milanovic was on Novi Beograd’s bench last season. He took over Olympiacos this summer. There will be many of the world’s best players in the water in Piraeus tomorrow, and two former great aces, who proved themselves as coaches, by the edge of the pool.

Don’t forget, Recco will be without captain Aleksandar Ivovic, who is still recovering from a serious injury and surgery.

Barceloneta opens the season with the game that is, on paper, the easiest away match in the group. The Spaniards will face Dinamo in Tbilisi. But, the Georgian team made a few upsets in the last two seasons. 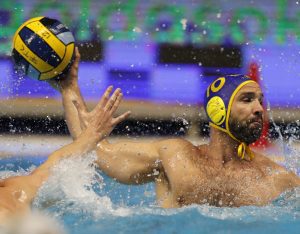 The other clubs in this group have more-or-less similar chances to win 4th place and qualify for the Final Eight. Still, it won’t be a big surprise if some of them earn points against the top three favorites.

Radnicki, Vouliagmeni, Jadran and Hannover are the teams that can make solid results in the 2023 Champions League.

On Day 1, Radnicki will play against Vouliagmeni in Kragujevac. Jadran, which has played better and better, travels to Hannover. The Germans haven’t played many matches since the beginning of the season, so the abilities of a new team, are still unknown.

Novi Beograd (2022: runner-up) – the roster and more facts about the club: Team without Achiles’ heel

Ferencvaros (2022: bronze medal) – the roster and more facts about the club: Medal contender, as usual

Brescia (2022: 4th place) – the roster and more facts about the club: Is it possible to arrive at F8 from qualifications again?

Jug  (2022: 8th place)– the roster and more facts about the club: Ambition remain same in season of jubilee

The first round in Group B will be played on Wednesday, with all four planned games.

Last week, Spandau 04 announced that it had canceled the match against Novi Beograd because of several Covid cases at the team. However, LEN made the final decision regarding this match. Today, the European Federation for Aquatic Sports confirmed that Spandau would host Novi Beograd on Wednesday. The Serbian team will travel to Germany tomorrow, as originally planned. According to the latest news, all of Spandau’s players underwent new PCR testing. There is still no official information on how many players tested positive. Still, Spandau will have enough healthy players to start the match (according to the LEN health protocol, if at least seven players test negative, a club will play the game as scheduled).

As for the quality of this group, it’s considered the “group of death” this season. Five participating clubs in 2022 Final Eight are here – Novi Beograd, Ferencvaros, Brescia, Jug and Marseille. Therefore, at least one club that played in the quarterfinals this year will watch the next edition of the F8 on TV. It is only sure that it won’t be one of the title contenders Novi Beograd that is directly qualified for the Final Eight as the host. 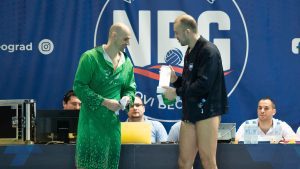 Two winners of the Total Player Award, Ferencvaros’ Denes Varga (2019) and Novi Beograd’s Dusan Mandic (2021), will face off in the group stage again, just like last year. In the season 2021/22, Ferencvaros won both games. Their next encounter is scheduled for January 25 in Budapest Photo by Djordje Kostic/VK Novi Beograd

Almost all clubs have very respectable players on their rosters, many high-class aces. It won’t be a surprise if more than one participant of 2022 Final Eight fail to qualify for the tournament in Belgrade.

Besides the five mentioned clubs, Sabadell and OSC can go high. Sabadell won the LEN Euro Cup last season. It has played very well in the Spanish Championships. Sabadell made a historic result ten days ago, beating Barceloneta and becoming the first club to defeat Barceloneta in the Spanish League since 2017.

OSC Budapest has been stronger and stronger from season to season. There haven’t been many changes on the roster in the last few seasons. So, all players know each other very well. OSC, the double European champion has never played at the F8 since the new Champions League format was introduced (season 2013/14), but it was very close to qualifying. The second-best Hungarian club in the past several seasons wants finally to jump over the last hurdle on the road to the Final Eight. It won’t be easy, but nothing is impossible. 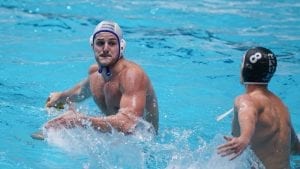 Spandau reinforced its team, but the Berlin-based club has played few matches since the start of the competitions, as well as Hannover. It isn’t easy to assess the team’s capabilities. 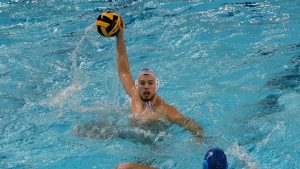 The derby of Day 1 is an encounter between Jug and Brescia in Dubrovnik. But, the other games will be interesting. There are no favorites in matches Sabadell- Ferencvaros and Marseille – OSC. 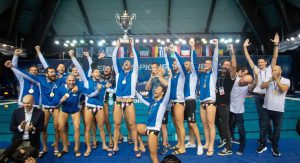